Best Practices:
Winter Painting—Weather or Not

Almost all the premature coating failures we see are for one of three reasons:

That third item might seem obvious to all us self-proclaimed “coatings experts.” But here’s a case that proves that the steps required to apply coatings under proper environmental conditions aren’t always as straightforward as we’d like—especially when a GC’s schedule is pushing the envelope. 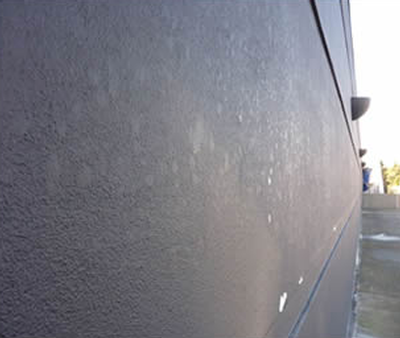 Images: MPI
Determining whether an environment is appropriate for coating is not always as straightforward as it sounds.

(And this is why MPI’s Level 2 Expert training course begins with a big section on why and how to assure proper environmental conditions during painting operations.)

The Case of the Big-Box Walls

This inspector was recently assigned to a renovation project where a large big-box store was to be repurposed for a multi-use development.

The initial inspection found the EIFS in good shape and the latex finish intact and tightly adhering, albeit a bit dirty. This would have been an easy repaint job—a powerwash to remove dirt and contaminants followed by two finish coats—if it had been conducted during mild weather.

But as happens far too often around here, the GC had scheduled the coating work for January and February 2014.

Now, we realize that a GC on a project in, say, Syracuse or Toronto would never tempt fate with that timing. But in our Pacific Northwest climate, it’s plausible to have milder dry weather suitable for exterior painting some weeks during the winter months.

And definitely not so during the winter of 2013-14, when we regularly suffered from frigid temperatures as low as -10 C (14° F), after which it would warm up, pelt rain, and then drop back down to well below freezing.

This cycle went on for more than a month. When the GC told the paint inspector it was time to paint, the inspector said absolutely not—the environmental conditions were not suitable.

The GC then offered to contain the area with shrink-wrapped scaffolding and propane heaters to maintain the wall surfaces at a temperature suitable for painting.

The scaffolding and containment were set up, and the contractor started by powerwashing the surface to remove visible dust and contaminants. The surface was then allowed to dry over several days.

Throughout this process, the inspector took regular readings to check that the temperature inside the containment was acceptable for painting, and was dismayed to find inconsistent results.

The shrink wrap was not completely secured. When high winds stripped off portions and overpowered the propane heaters, ambient air temperature readings inside this supposedly heated and contained area would range from 12° C (53° F) down to -1 or -2° C (30 – 28° F).

The inspector then demanded that the containment be shored up until a consistent suitable interior temperature could be maintained. Painting work started on an east elevation. The contractor sprayed and backrolled the specified black elastomeric finish in one day and applied the second coat the next day.

The temperature and relative humidity inside the containment were monitored throughout the painting operation to verify that the product was being applied in conditions that were within the specified range for the product.

The Difference a Day Makes

The day after the second coat was applied, however,  the GC—mindful of the daily rate he was paying—removed the scaffolding and containment from the walls.

This was done against the recommendation of the inspector, who knew from the product data sheet that a minimum 48 hours of cure time was required before the elastomeric finish could withstand atmospheric service—and even longer before it would develop full elastomeric properties.

That wall surface should have remained contained and heated for at least one more day. The only other hope was to pray for mild weather.

Alas, consistent with the construction version of Murphy’s Law, the day after the second coat was applied, the now-exposed wall got pounded with torrential rains.

And when the sun came out the subsequent day, lo and behold, the newly painted wall was littered with countless (thousands?) of blisters

They bulged under the stretchy elastomeric finish and, as the day went on, grew with each added degree of warmth. A cut into the black blisters caused telltale water to pour out.