Napa Quake Damage Could Top $4B

Damage estimates continue to mount in Northern California more than a week after 6.0 magnitude earthquake struck the Napa Valley region.

Current estimates range anywhere from $300 million to $4 billion, with state and federal authorities warning that a final assessment could take months. 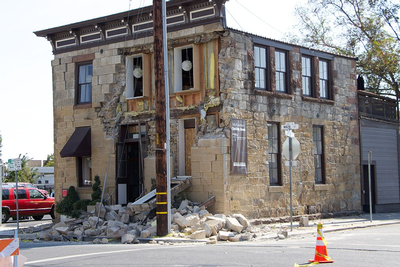 Wikipedia
The front of the historic Sam Kee Laundry Building in downtown Napa sustained extensive damage in the 6.0 earthquake that shook the region Aug. 24.

As of Wednesday (Aug 27), 116 buildings in Napa had been red-tagged as uninhabitable, with 513 yellow-tagged for repairs, the San Francisco Chronicle reported.

California Gov. Jerry Brown must request federal disaster assistance, which could go far in helping businesses and homeowners rebuild. Federal aid would also be used for repairing roads, schools, municipal buildings and other infrastructure.
The quake was the strongest to hit the region in 25 years. It struck about six miles south of Napa and lasted 10 to 20 seconds, according to the U.S. Geological Survey. Hundreds of people were treated for injuries.

One tool that could help authorities better assess the tremor's damage could come in the form of a view from above.
Nearly 200,000 people have watched the video that Evan Kilkus recorded with his “quadcopter” that depicts the damage to businesses in Napa.

“This video is intended for educational purposes to show builders and and building owners across the world the results of this earthquake,” Kilkus wrote in the video’s description.

“This video is also intended to show how a quadcopter/drone can be used to help identify hazards and assess the damage in this situation.”

While Kilkus’s video could assist authorities in assessing the damage, authorities say there is no “quick answer” as to how much recovery will cost.

Some reports quote $300 million, while others quote as much as $4 billion. The higher figure comes from a Los Angeles Times article that cites Kinetic Analysis Corp., a company that estimates damage from natural disasters.

Meanwhile, the low figure does not take into account damage to public infrastructure or the many wineries that lost priceless inventory, the San Jose Mercury News reported. 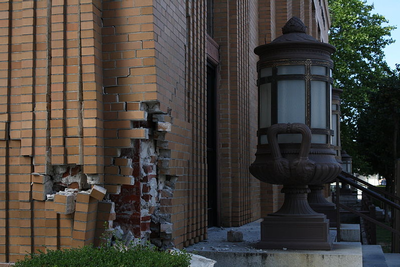 Wikipedia
Damage estimates for Napa's public infrastructure, such as the U.S. Post Office building, could take months to determine.

According to a survey, the region’s wineries estimate damage at $38 million, but must meet a threshold of $55 million to qualify for federal relief.

"There is a process required," Thompson said. "We're working to get that process done as soon as we can."

Still, according to CBS San Francisco, the chances of federal aid coming from the Federal Emergency Management Agency (FEMA) is about 50-50.

“The fact that so few people are going to have insurance, that is going to be a stronger pull to bring FEMA in,” Amy Bach of the California Public Utilities Commission told the news outlet. “On the other hand, the scale of it is not as bad as some other disasters.”

Under federal programs, homeowners can qualify for a maximum of $30,000 in grants, with the average grant amount being $4,000.

Low-interest loans are also available in amounts up to $240,000 for homeowners, and renters without insurance can qualify for up to $40,000 in loans.

In the wake of this earthquake, many wonder if current building projects for taller buildings in San Francisco should proceed.

While the city, 30 miles from the quake’s epicenter, didn’t suffer damage from the Napa Valley earthquake, constructing such buildings in an earthquake zone has many residents nervous.

The San Francisco Chronicle reported that “structural engineers have no such doubts, saying the new high-rises are shaped by technological innovations so that even in the worst earthquake they won't fall down. People shouldn't be trapped inside. Glass shards won't shower the streets.”

"The No. 1 priority is to protect lives. Then be repairable. That's all that we're expecting," Tom Hui, director of the city's Department of Building Inspection told the news outlet.

"No building is damage-proof."

Currently, more than a dozen towers are under construction or have recently been completed in downtown San Francisco, most using a process called “performance-based design.”

The Chronicle reported that the system was approved in 2008 “as an alternative to the city's building code for structures above 240 feet in height.”

Using this design means engineers and architects can use computer simulations to determine whether their buildings will survive an earthquake.

Towers can also be built without horizontal beams, concentrating the strength vertically as the structure’s core, and allows for a more visually appealing exterior.

But such buildings still must meet the city’s strict code standards as "our building code is more restrictive than California's building code," Hui said.

That being said, structural engineers say using technological innovations allow for building tailored to their building sites versus sticking to what was done in yesteryear.