Public Works of the Year Honored

Twenty-five public-works projects throughout North America are being hailed for their efficient planning and cooperative achievements.

The American Public Works Association recently awarded its Public Works Projects of the Year, which encompassed everything from new construction of a coastal tunnel to restoration of a 123-year-old courthouse. 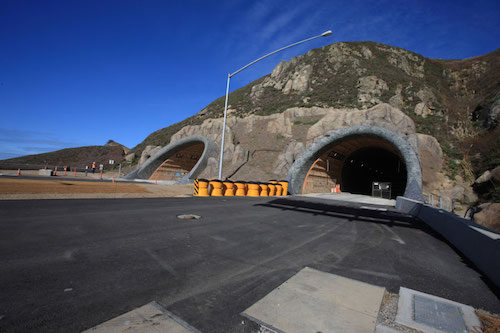 Caltrans
California's Tom Lantos Tunnels won in the Transportation category for a project greater than $75 million. The tunnels replace a treacherous road nicknamed the "Devil's Slide."

The annual awards showcase excellence in the management and administration of public works projects, recognizing the alliance by the managing agency, contractor, consultant and their cooperative achievements.

APWA, headquartered in Kansas City, MO, is a not-for-profit, international organization with over 28,500 members.

The projects were categorized by dollar amount.

In addition, all categories except Historical Restoration/Preservation awarded a Small Cities/Rural Communities project, for agencies from cities and counties with a population of 75,000 or less.

The award was established to promote excellence in demonstrating creativity, ingenuity, and efficiency in delivering projects that impact a community.

And the Winners Are...

By category, the awards went to: