Smart surfaces that can instantaneously change properties in response to their environment could be the wave of the future, with a new coating developed by a multinational team of researchers.

The new type of polymer coating can change its surface properties in less than a second, say the scientists from Lebanon, Russia and Germany.

The development could lead to "smart surfaces" that could very quickly change their properties based on environmental changes, like shifts in temperature, pH level or light. Current polymers take minutes to hours to change, the team said.

The super-fast switch could have a variety of uses, such as tiny temperature sensors or medical assays with cells that can quickly release from the surface on which they grow, according to the researchers. 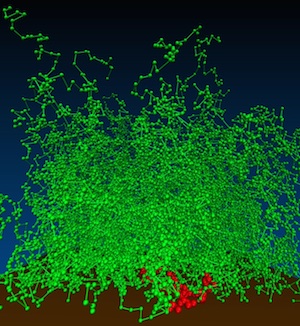 S. Qi / University of Mainz via physics.aps.org
A computer simulation shows how the new polymer brush's minorty strands (in red) crouch down at lower temperatures (left) and stand up at higher temperatures (right).

The researchers are from the American University of Beruit, the St. Petersburg State Chemical-Pharmaceutical Academy in Russia, the Institute of Macromolecular Compounds of Russian Academy of Sciences, and the University of Mainz in Germany.

Their research, "Sharp and Fast: Sensors and Switches Based on Polymer Brushes with Adsorption-Active Minority Chains," was published Aug. 8 in Physical Review Letters, a journal from the American Physical Society.

How it Usually Works

Polymer molecules are often used to form chains that can be attached at one end to a solid surface, creating something that looks like bristles on a hairbrush. These brushes allow researchers to control surface properties like friction and water interactions.

For the past several years, researchers have started making the brushes act like switches that allow a surface to change how it interacts with its surroundings based on environmental changes.

For example, a polymer brush could switch from being hydrophobic to hydrophilic.

Currently, however, this kind of switch can take minutes or hours, because the similar polymers get twisted up with one another and need time to untangle, explained Friederike Schmid of the University of Mainz.

A New Kind of Response

Schmid and her colleagues say their polymer system switches properties in response to temperature change—a process that could be implemented for response to other environmental changes.

The researchers developed a brush that uses almost all the same type of polymer to determine the default properties. A few different chains are mixed in and are at least 10 percent longer than the majority chains. These chains "crouch down" on the surface below a critical temperature, but "stand up" at higher temperatures.

A temperature increase of about 10 degrees or less can change the position of the minority chains in a few milliseconds, the team found.