Oregon's Sellwood Bridge is almost 90 years old, weighs over 3,000 tons, and is chock full of lead paint, but it could all be yours—if the price is right.

The Sellwood Bridge is a rare four-span continuous structure over the Willamette River in Portland, OR.

Opened to traffic in December 1925, the bridge is now structurally deficient and functionally obsolete; its federally funded replacement is being built as we speak.

And that creates an opportunity: The old bridge's 1,100-foot-long continuous steel truss span is up for grabs, Multonomah County announced Tuesday (Aug. 12). 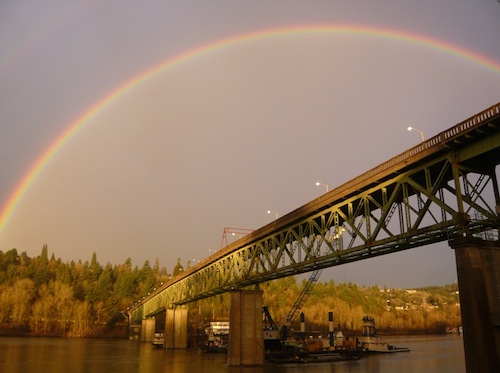 Sellwoodbridge.org / Tom Hendrickson
Opened to traffic in 1925, the 1,100-foot-long Sellwood Bridge is structurally deficient and being replaced. Multnomah County is accepting bids from potential buyers.

Proposals to buy the bridge are being accepted until Sept. 12.

The offer has some strings attached.

"While Multnomah County may offer a great deal on the structure, there are a few important things would-be buyers should know," the county said.

First, the bridge is designated a historic resource, which requires that it be made available for historic reuse before it is removed.

In addition, prospective buyers will have to:

The bridge will go to the highest qualified bidder who can move the structure sometime between late 2015 and early 2016.

If no buyer is found, the steel, concrete and lead paint will be recycled.

Last year, engineers moved the 3,400-ton, one-piece bridge several feet down the river by sliding it along tracks covered in Teflon and liquid dish soap. The bridge had to be moved to serve as a detour while its replacement was being built.