A reported coatings application error on a $99 million air traffic control tower may cost millions of dollars to repair and could set back the project a year, according to a Las Vegas newspaper.

The problem was discovered in January and is now the subject of meetings by representatives of union workers, the contractor and subcontractors, and the U.S. Federal Aviation Administration, the Las Vegas Review-Journal reported Thursday (Aug. 7) evening in a copyrighted investigative article.

The tower project is under contract to Chicago-based Walsh Construction and Archer Western Contractors. 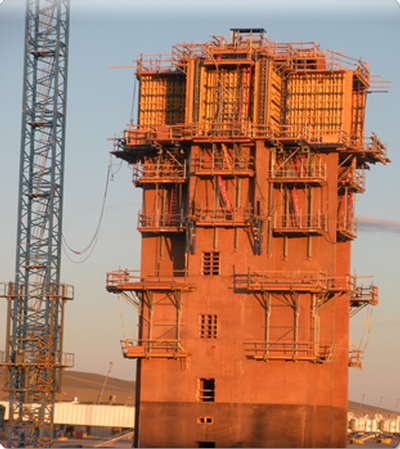 Walsh Construction
The project began in June 2011, and the coating problem was discovered in January,

A woman at Walsh's corporate headquarters said Friday (Aug. 8) that the company was unavailable for comment on the report.

The newspaper reported that a "chemical coating to prevent the spread of toxic fungus was improperly applied and is ineffective."

"That means workers might have to cut through interior walls of the building to assure that the chemical treatment is properly applied," the report said.

Workers on the project told the newspaper that the coating was supposed to have been applied to dry wall, duct and subfloor surfaces.

Instead, they said, the coating was "placed in flexible ducts that had been lubricated for installation. The chemical substance never adhered to the oily surfaces and when workers tested the air conditioning and heating system, flakes of the substance were blown from ducts into rooms."

The problem was discovered in January, the newspaper said.

Representatives of union workers, the contractor and subcontractors and the FAA "have begun meeting to assess the best way to address the problem," the Review-Journal said.

The coating is designed to prevent stachybotrys chartarum, commonly known as "black mold"—a toxic fungus that led to the shutdown of state and local buildings in the Las Vegas Valley in the late 1990s and early 2000, the Review-Journal said.

Because of the coating application error, workers on the McCarran project "feared for their health, and conditions were serious enough to warrant a visit from leaders of the Professional Air Safety Specialists union from Washington to inspect the site," the news outlet said.

"This project also includes construction of a four-story TRACON base building, two-level parking garage, guard station, and a tuned mass damper in the control tower," the site said. "Our team self-performed concrete operations for the tower portion of this project to assure quality, schedule, and budget."

The project began in June 2011. The architect is Alaska-based WHPacific. The Walsh site lists its contract at $40 million and notes a completion date of December 2012.

Officials had expected the tower to be operational by 2015, "but the FAA now says it won’t be able to use the facility until late 2016 or early 2017," the Review-Journal reported.

The FAA made no statement on its website. In a statement to the Review-Journal, the agency said it had "a diligent inspection and oversight process and is closely monitoring the construction" at McCarran, the eighth-busiest airport in the United States.

“The FAA identified some construction issues and is working with the contractor to address them," the statement said.

"The FAA will ensure that any outstanding issues are resolved before accepting the final project from the contractor to ensure our employees and operations will not be affected.”

Officials said the tower was expected to be operational by 2015, but the FAA now says it won’t be able to use the facility until late 2016 or early 2017. The current tower, which contains both asbestos and lead-based paint, will then be demolished.

O'Hare and Other Problems

Several Walsh projects have made headlines in recent years.

Last year, Walsh agreed to pay $10 million of a $21 million settlement regarding defective steel and welds at O'Hare Airport in Chicago. Walsh, the general contractor on that project, had previously made $26 million in repairs on the project.

The city's claims against Walsh and other contractors had been pending since 2007 and were based on defects with structural steel and cracks in welding work performed on O'Hare's Terminals 2 and 3 and canopies extending over the roadway.

In 2012, two Walsh employees were killed on separate Indiana bridge and highway projects. Those incidents followed a week-long suspension of a Walsh bridge project in Connecticut for state-ordered safety training. That order followed what Connecticut DOT called the fourth “completely preventable” accident in several months on the $230 million project.