Even when the ocean looks clean, the top layer is chock full of paint dust and particles, researchers have found.

The findings come from a study that had been looking for plastic—not paint—pollution in the uppermost millimeter of the ocean. The study was led by Won Joon Shim, an environmental chemist at the Korea Institute of Ocean Science and Technology in Geoje-shi, South Korea.

While the researchers did find some plastic pollution, they discovered that microscopic paint and fiberglass particles made up the overwhelming majority of what's residing on the top layer of the sea, ScienceMag.org reported.

The top millimeter of the ocean, called the sea surface microlayer, has different characteristics than the ocean underneath that cause it to retain small fragments. 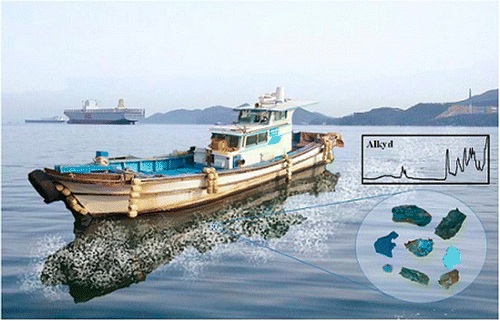 Researchers via pubs.acs.org
The top of the ocean's surface contains a large amount of paint dust and chips, as well as a small amount of plastics, South Korean researchers say.

In past studies, researchers have used coarser nets and took samples that included water below the microlayer.

In this study, the researchers took water samples from the microlayer along the southern coast of Korea, up to 16 kilometers (about 10 miles) offshore.

The researchers found that 81 percent of synthetic materials in the microlayer were alkyds; 11 percent were polyester resins; and 4 percent were plastics. On average, one liter of water contained 195 particles.

Laboratory testing using infrared spectroscopy matched the particles with paint chips collected from local shipyards, according to the researchers.

However, the group did not find antifouling paint. The paint was from decks and other areas of vessels above the hull, the team said.

The group also found a large amount of paint particles off another part of the Korean coast and hypothesized that areas with less shipping and fishing would have fewer particles.

The findings are "continuing to open our eyes to how many small synthetic particles are in the environment," Kara Law, an oceanographer at the Sea Education Association, told ScienceMag.org. Law was not involved in the study.

The research team now plans to study the paint particles' metals and organic chemicals to determine whether they could harm marine life.