A half-million storage tanks installed below 156,000 gas stations in the United States could be harboring a "hidden hazard" in need of a pricey fix, federal scientists are warning.

A new study by the National Institute of Standards and Technology (NIST) "has demonstrated severe corrosion—rapidly eating through 1 millimeter of wall thickness per year—on steel alloy samples exposed to ethanol and acetic acid vapors." 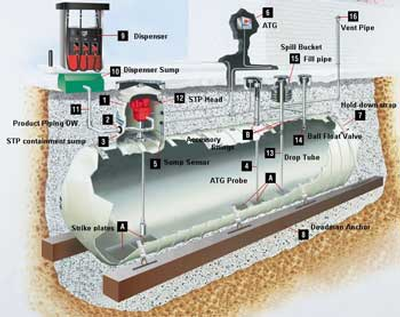 In recent years, field inspectors in nine states have reported many rapidly corroding gas storage tank components such as sump pumps, NIST announced. The problems have been generally found in tanks that hold gasoline-ethanol blends.

NIST followed up those field reports with a 30-day laboratory study of sump pump components, which are located above the tanks and directly below the access covers at gas stations.

The researchers developed new test methods and equipment to mimic the immersion, vapor and bacteria exposures of copper and steel alloy sump pumps.

The study "confirmed damage similar to that seen on sump pumps by field inspectors," NIST reported.

The immersed steel samples corroded most slowly—possibly because of a protective biofilm effect created by the bacteria, NIST said.

The same rate of corrosion could afflict steel tanks and pipes exposed to the vapors, the researchers suggested.

“We know there are corrosion issues associated with the inside of some tanks," said NIST co-author Jeffrey Sowards. "We’re not sure, at this point, if that type of corrosion is caused by the bacteria."

Localized corrosion was also found on cold-worked copper, which is used in sump pump tubing and could leave the tubing vulnerable to stress-corrosion cracking.

Rapid corrosion could lead to failures, leaks and contamination of groundwater, NIST said.

The findings suggest that gas stations may need to replace their submersible pump casings sooner than expected, at a cost of $1,500 to $2,500 each, the team said.

Much of the U.S. fuel infrastructure was designed for unblended gasoline, not the billions of gallons of corn-based additive now used annually.

NIST has reported on ethanol damage before. In 2011, NIST presented evidence that ethanol-loving bacteria "boosted fatigue crack growth rates by at least 25 times the levels occuring in air alone."

"We have shown that ethanol fuel can increase the rate of fatigue crack growth in pipelines," Sowards said at the time.

"Substantial increases in crack growth rates were caused by the microbes."

Ethanol in particular is "corrosive and highly water soluble," the EPA says. "As a result, special precautions must be taken in order to prevent corrosion of the [Underground Storage Tank] system and phase separation of fuel in the tank.

EPA warns UST owners and operators to "be aware of the technical and policy issues related to storing and dispensing biofuels, such as ethanol and biodiesel." The agency's UST office offers technical guidance on its Biofuels page.

In July 2013, NIST held a workshop on biocorrosion associated with alternative fuels. Those presentations and more information are available here.