High-Stakes Decision is No Simple Call

Choosing a project delivery system for bridge or tunnel construction can be a multimillion-dollar decision. So which one is best?

The answer, according to a new report: All of the above.

The fact is, each model offers distinct pluses and minuses for architects, owners and contractors—and in the high-stakes world of construction deliverables, the savvy project team had better learn the ins and outs of each. 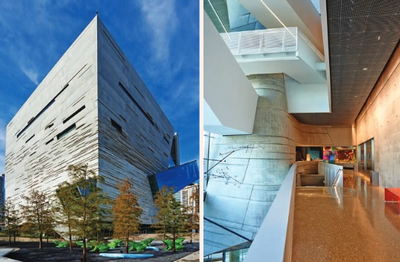 McGraw Hill Construction
The $95.6 million Perot Museum of Nature and Science in Dallas used a CM-at-risk contract—a system that owners like more than architects and contractors seem to realize.

That's the bottom line from McGraw Hill Construction's new study, Project Delivery Systems: How They Impact Efficiency and Profitability in the Buildings Sector.

The free, 68-page analysis explores facts and trends behind project delivery systems: "one of the most fundamental ways in which project owners can impact efficiency, productivity and profitability."

The report looks at both commercial and institutional building projects and public-works infrastructure.

For a decision that carries "potentially powerful implications for the ability of the project to be delivered satisfactorily, on schedule and on budget," the survey of architects, contractors and owners turned up suprisingly little agreement.

With one exception: "There is a consensus among owner, architects and contractors that design-build has the best impact on schedule," McGraw Hill said in a release.

Otherwise, all bets were off on a "best" system for project cost and client satisfaction, said the study, which focused mainly on three systems:

"Project delivery greatly varies depending on what is actually being delivered," the report notes.

Design-bid-build has been the dominant construction model since the early 1900s and remains the most widely used delivery system today for all types of projects, the report says. But that is changing.

About one-quarter of contractors also report being engaged in projects using design-build and CM-at-risk.

Use of design-build and CM-at-risk are both expected to spread, at the expense of design-bid-build, according to "a high percentage of" owners, architects and contractors.

In the public sector especially, the report said, 69 percent of architects and 48 percent of contractors foresee an increase in CM-at-risk use.

Design-build is a "fast-growing project delivery system being used on roadway, bridge, railway, waterway, port and airport projects," the study found. A 2011 study found that design-build was being used on about 40 percent of nonresidential construction projects in the U.S. in 2010, a 10 percent increase since 2005.

The study cited several "clear trends" about the benefits of using any established delivery system:

Each system had its strong perceived drivers and concerns, the study reported.

Fans of design-bid-build were most motivated by maximizing their project budget and reducing cost. They were most concerned about checks and balances, higher-cost contracts and longer-term contracts.

Proponents of design-build aimed to maximize their budget, but expressed significant lack of familiarity with the system and concern over risk, liability and the project schedule.

Backers of CM-at-risk sought most to improve project quality, followed by budget concerns. The chief obstacle, again, was lack of familiarity and a concern over too few checks and balances.

The best way to mitigate risk is to select the system that fits the particulars of the project, the study says.

"That means identifying the project's sensitivities and identifying which delivery system allocates risks to the parties that are best able to control for them," the authors say.

What is important is that each member of the team understand not only each system, but also understand how other members of the team view that system, says Harvey Bernstein, vice president of industry insights and alliances at McGraw Hill Construction.

Architects and contractors, in particular, are not fully aware of how owners perceive the drivers and obstacles for each system—a critical gap, because the owner selects the system, the study notes.

For example, 60 percent of owners reported being highly satisfied with their CM-at-risk projects, although architects and contractors felt that system was the least likely to satisfy a client.