Sometimes being destructive is the only way to get it done—at least when it comes to measuring each layer in a coating system, according to a new how-to video that covers the basics of the Tooke Gage.

"Destructive Testing of Paint and Coatings for Dry Film Thickness" is the newest addition to the instructional PaintSquare Video Learning Center series, which delves into multiple aspects of protective coatings work. 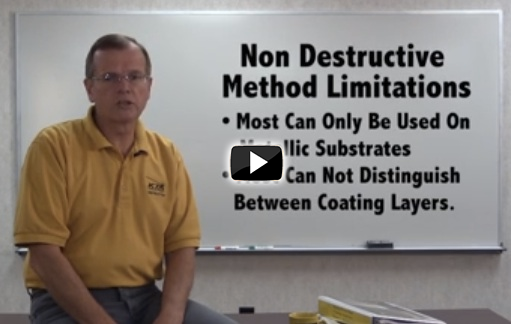 Created and narrated by experts at KTA-Tator Inc., the Video Learning series covers a wide range of topics in protective coatings work, from quality-control and health and safety issues, to basics on the proper use of coatings instruments.

From Lead Detection to Ventilation

Previous titles in the series include:

Each installment is available free in the PaintSquare Video Learning Center.

In this video (3:04), KTA's Ken Trimber discusses the Tooke Gage and its use in destructive testing of coatings for dry film thickness measurement.

While coating thickness is commonly measured using non-destructive gages, those methods can have significant limitations, Trimber explains. For example, most can only be used on metallic substrates and cannot distinguish between coating layers.

The Tooke Gage is used when there is a need to measure individual coating layers, which if often necessary for troubleshooting, questions about the thickness of an underlying coat, or failure analysis.

Trimber talks briefly about the history of the Tooke Gage, and explains the components of the tool.

The Tooke Gage is destructive because it makes an incision or groove about the width of a pencil line through the coating film down to the substrate, Trimber says.

The gage measures coating thickness using basic trigonometry, by cutting a precision V-groove into the system, creating a right triangle.

But you don't have to know trigonometry or calculate the angle—tool does all the work for you.

While the gage is unaffected by the type of substrate, the base metal, or the surface profile, the top of the coating does have to be relatively smooth.

"For example, if you're looking at thickness on a concrete block, the results may be inaccurate if that block has a rough texture because the cutting angle will vary," Trimber says.

"And in order to get the proper thickness, the angle has to be consistent."

According to Trimber, the Tooke Gage conforms to ASTM D4138, "Standard Practices for Measurement of Dry Film Thickness or Protective Coating Systems by Destructive, Cross-Sectioning Means."