The infamous winter of 2013-14 is now taking the blame for a reduction in nonresidential construction spending that will affect activity for the rest of the year.

The American Institute of Architects’ new Consensus Construction Forecast, a semi-annual survey of leading U.S. construction forecasters, is projecting a 4.9 percent increase in construction spending for 2014, down from the previous estimate of 5.8 percent. 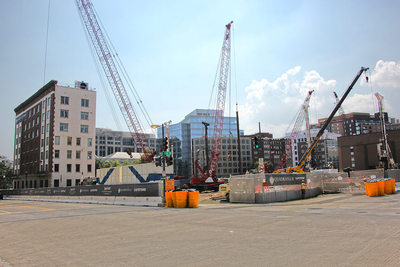 Tim Evanson / Wikimedia Commons
The luxury Marriott Marquis in Washington, D.C., is part of what AIA calls the "red-hot" hotel construction market. The hotel, pictured under construction in 2011, opened in April 2014.

Next year should be better, however, with AIA sticking to its earlier project of an 8 percent increase for 2015.

Meanwhile, architectural billings are standing strong, with June turning in the highest marks since October 2010/

"The performance of the nonresidential building market has been a mixed bag so far this year," said the report, authored by AIA chief economist Kermit Baker.

From May 2013 to May 2014, spending on office buildings increased by 19 percent, while the "red-hot hotel market" grew by 11 percent, said Baker. Retail, commercial and manufacturing facilities grew in the single digits.

Then there was the institutional sector, which dragged down the positive numbers. Spending on healthcare and public safety projects declined by more than 10 percent; the education center slipped by 1 percent; and spending on religious facilities also declined, Baker said.

That left the "amusement and recreation" sectors as the sole growth areas in the insitutional construction, the report said.

While the landmark winter took a bite out of economic growth in the first quarter, "most economists were surprised by the severity of the downturn, with the [Gross Domestic Product] declining almost 3 percent on an annualized basis—the steepest quarterly downturn since the depths of the Great Recession," AIA reported.

However, AIA considers the quarter "an aberration" that "doesn't seem to reflect structural problems in the economy." The organization notes June projections by the Federal Reserve Board for 3 percent growth in the second half of the year.

Commercial buildings should see "healthy gains" during the rest of 2014 and into 2015, while the institutional market is expected to begin "a full-fledged recovery" next year.

Here's the look ahead.

Housing starts nationwide should total between 1.0 million and 1.1 million this year—an increase of 10 to 15 percent over 2013 but well below the two million-plus starts at the peak of the bubble in 2005.

It is also "well below" the 1.5 million annual average seen during the last five years of the 1990s, when demand was more typical, AIA said.

Still, multifamily construction is expected to be well above its recent showing and above the late-1990s average. The Architectural Billings Index for residential construction averaged 5.67 during the second quarter of the year and has been above the all-important threshold of 50 since 2011. That index is heavily weighted toward the mmultifamily market because of architects' heavy involvement there, AIA explained.

Recovery in the commercial market "has been very uneven," with both ups and downs reported in recent years.

The office and hotel markets are projected to see combined growth rates above 25 percent in 2014 and 2015, wwith modest increases in retail.

The institutional sector has been down for more than two years, but it's still not out, according to AIA.

The numbers are "still disappointing," with ABI scores running below 50 from August 2013 to May 2014. June squeaked above 50, and AIA hopes the gains will hold.

The institutional market's late-2014 recovery estimate has been pushed into 2015, probably led by the education sector and followed by resurgence in healthcare.

AIA also found good economic news in the latest Architectural Billings Index figures. The June score was 53.5, up from 52.6 in May. Any score above 50 indicates an increase in billings.

The new-projects inquiry index was 66.4, up noticeably from the reading of 63.2 the previous month and its highest level in a calendar year.

The score for design contracts in June was 55.7 – the highest mark since that indicator was first measured in October 2010.

Baker said the design and inquiry numbers in particular signaled "sustainable strengthening across the construction marketplace."

“With the first positive reading since last summer in billings at institutional firms, it appears that design activity for all major segments of the building industry is growing," he said.

"The challenge now for architecture firms seems to be finding the right balance for staffing needs to meet increasing demand.”