A dumpster diving dad in Brooklyn, NY, is taking his backyard treehouse to the next level by using only repurposed materials to build the two-story structure.

Gennaro Brooks-Church, 43, an eco-friendly designer and contractor, decided to build a treehouse in the backyard of his brownstone after a nudge from his girlfriend. 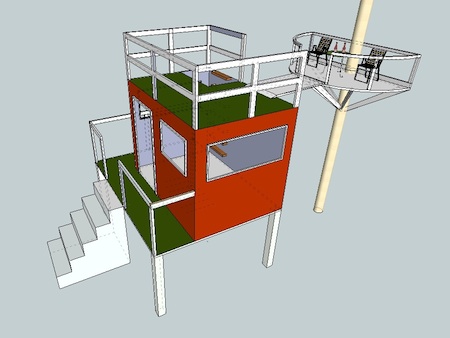 Images: ecobrooklyn.com
The eco-friendly treehouse was inspired by an intern's idea two years ago (shown here).

Going to 'Wing It'

Brooks-Church was also inspired by a project an intern at his firm, Eco Brooklyn, did two years ago.

However, Brooks-Church won't be using the intern's ideas.

“It’s more a creative process than anything else. I want to experiment with different things.”

The ground floor of the treehouse will become a chicken coop made from dirt to foster natural plant and flower growth. The second floor will be made out of sheets of salvaged glass.

An old fire escape ladder will bring the floors together, but Brooks-Church doesn’t have a set design for the structure.

A Buildings Department spokesperson told DNAinfo that treehouses are legal in the city and don't require permits.

The treehouse will take about a month and a half to build, but his girlfriend, who wants to add a hot tub, has to sign off on the plans.