U.S. Disaster-Proofing Gets $1B Boost

Reeling from a deadly series of natural disasters, stricken communities across the U.S. now have an additional billion-dollar incentive to rebuild more resiliently.

But the incentive has spun off a dustup of its own.

A new Natural Disaster Resilience Competition invites communities with storm-ravaged infrastructure, buildings and homes to develop more resilient replacements for the structures that were lost. The billion-dollar program will provide grant money for selected initiatives. 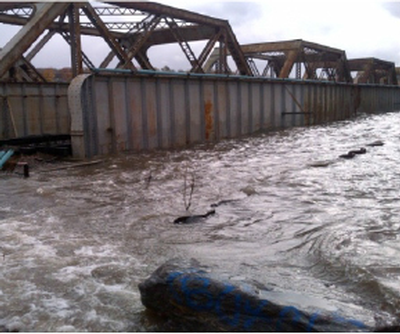 MTA
Half of New York's Hudson Line was submerged in Superstorm Sandy. One billion dollars in Sandy relief aid is being diverted to the new Natural Disaster Resilience Competition.

President Obama announced the program June 15 in an address at the University of California at Irvine.

Not everyone has welcomed the program. Funding for the competition comes from the flexible federal grants that remain from the multibillion-dollar Hurricane Sandy relief package Congress passed last year.

Sandy claimed nearly 300 lives, directly and indirectly, and caused more than $65 billion damage as it smashed its way up the Eastern Seabord in October 2012. More than 24 states saw damage by the time the storm passed. New Jersey and New York were particularly hard hit; the damage to New York City's infrastructure was unprecedented, officials said.

New York and New Jersey lawmakers have opposed using the Sandy aid for the new competition, saying those funds should be used as originally intended.

The national competition will support innovative resilience projects at the local level while encouraging communities to adopt policy changes and activities that plan for the impacts of extreme weather and climate change, according to a news release from the White House.

"Heat waves, hurricanes, and severe storms have all become more frequent and more intense," the White House said. "And sea level rise is causing some communities to flood at high tides and threatening homes and critical infrastructure."

Any state or local government that experienced a Presidentially-declared major disaster in 2011, 2012 and 2013 is eligible for about $820 million through the competition.

In addition, about $180 million will be available to states in the Hurricane Sandy-affected region to help address critical housing needs.

Successful applicants will show how their proposed action relates to the disaster from which they are recovering, the release said.

The U.S. Department of Housing and Urban Development (HUD) will ensure that geographic diversity is considered in selecting competition winners, officials said.

“When we joined together to pass the Sandy relief package in Congress, it was both our intention and expectation to see these funds used first and foremost to meet the unmet needs of Sandy victims,” the Senators wrote.

“Any action to the contrary is not warranted and would leave aid programs unfunded and our ongoing recovery efforts incomplete.”

The Sandy-affected region has seen more than $15 billion of the nearly $20 billion available in flexible federal grants either distributed or obligated, officials say.