A global engineering firm has unveiled 3D-printed structural-steel building components, touting “a whole new direction for the use of additive manufacturing in the field of construction and engineering.”

A team at UK-based Arup used 3D printing technology, or "additive manufacturing," to develop a design method that could be used to produce very intricate or complex steel elements of tensile structures. 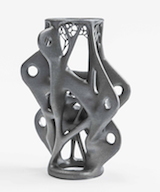 Headquartered in London, Arup is a multinational that provides engineering, design, planning, project management and consulting services for all aspects of the built environment.

The company said its research showed that additive manufacturing could reduce costs, waste and the carbon footprint of the construction sector.

The team's Exhibit A: a redesign of a steel node for a light-weight structure.

To develop the nodes, a laser heats up and melts a fine layer of steel powder, which is then solidified, Gizmag.com explained. The structure is gradually built up by adding new layers of steel powder.

"This has tremendous implications for reducing costs and cutting waste. But most importantly, this approach potentially enables a very sophisticated design, without the need to simplify the design in a later stage to lower costs," Galjaard said.

Held Back by 'Traditional Thoughts'

In an interview with Foundry-Planet.com, Galjaard said the nodes were about 12 centimeters tall, scaled to 40 percent of the original size, and represented the first part of the research.

"We were actually quite surprised to see no one in the building industry was applying this technique so we thought, 'Why don't we give it a shot and design something with a very open mind with the idea that it could easily fail or not be something that we would want to use?'" Galjaard explained.

"We could have printed them in almost real size, but because for us it was just a model, we didn't print a full-scale model, because it was getting a little bit expensive for an internal research project."

Galjaard told Foundry-Planet.com that the team was "pleasantly surprised" with the material characteristics, but also realized it was "still very limited by traditional thoughts."

"What you see here is a nice model, but it's definitely not the most optimized version," Galjaard said. "We're going through the design process again, trying to get rid of all those traditional thoughts that were still in our heads.

"We actually think the next node will even look different than the one you see in the pictures."