The European Union is throwing its support behind an effort to eliminate lead and mercury exposures among millions of Filipino schoolchildren.

The EU and three government agencies of the Philippines announced a "solidarity statement" Tuesday (June 24) to commit to taking steps to protect schoolchildren from the hazards of lead and mercury exposures. The plans include reducing the use of lead paint and products with mercury.

With the EU's support, the Philippines' Department of Environment and Natural Resources, Department of Education. and Department of Health are launching a nationwide campaign that aims to "promote greater inter-agency and multi-stakeholder support towards lead and mercury-free school environments for Filipino children," said DENR Secretary Ramon J.P. Paje. 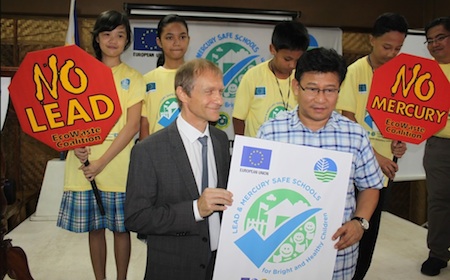 "Chemical safety and security must be a priority of the schools," Paje said. "Administrators, supervisors, teachers and students alike must work together to ensure that these chemicals are handled with precaution and care."

The European Union is a sponsor of several major initiatives to eradicate lead paint in Asia.

The signing ceremony for the campaign, called "Lead- and Mercury-Safe Schools for Bright and Healthy Kids," was held at Commonwealth Elementary School in Quezon City, the Philippines.

Also taking part in the event were EU Ambassador Guy Ledoux and representatives of the Eco-Waste Coalition and the International POPs Elimination Network (IPEN), a global network of over 700 non-government organizations whose objective is to eliminate persistent organic pollutants (or POPs).

Paje said he hoped other schools would be inspired to commit to a healthy and safe environment and added, "The true wealth of a nation can only be truly realized through a healthy and educated generation and citizenry."

Paje said that with the help of the SWITCH-Asia Programme, the Eco-Waste Coalition and IPEN, the government can strengthen the ability of schools to manage lead, mercury and other hazardous chemicals.

The SWITCH-Asia Programme, developed by the EU, aims to promote sustainable products, processes, services and consumption patterns in Asia by improving cooperation with European retailers, producer and consumer organizations and the public sector.

Architectural paint with lead is still widely available in Asia, according to a report that found 803 paint cans from 404 brands across seven Asian countries had "extreme levels" of lead in paints sold for household use in developing countries.

The program also aims to bring attention to government policies on these chemicals, such as the DENR Administrative Order No. 2013-24, "Chemical Control Order for Lead and Lead Compounds," which Paje issued last year.

By 2016, paints for architectural, decorative and household applications will have to comply with a lead content of 90 parts per million; industrial applications have until 2019 to comply.

Ledoux applauded the government's action on the problem and said the "dangers of lead exposure in the Philippines are real."

"The situation is well-known and I would like to congratulate Secretary Paje for his rapid and effective intervention to address the issue. The recent chemical control order (issued) by the DENR to limit the use of lead in consumer products is a breakthrough."