The RTD INCOTEST (INsulated COmponent TESTing) system was developed in a partnership between Delta SubSea, a provider of subsea services and technology; and Applus RTD, a global energy service provider. 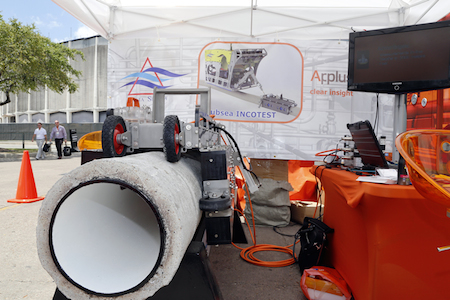 Delta SubSea
The RTD INCOTEST was developed in a partnership between Delta SubSea and Applus RTD.

The tool uses Pulsed Eddy Current technology to detect surface and subsurface corrosion in thin- and thick-walled pipelines. Operators can perform up to 1,000 measurements per day at depths up to 3,000 meters (9,842 feet), according to the companies.

The INCOTEST system can measure through marine growth and concrete to give an average wall thickness of each measured area.

"More traditional techniques rely on either visual inspection of pipelines or ultrasonic testing, but the INCOTEST system delivers a number of advantages to operators looking to make informed decisions about maintenance programs," said Riccardo Scottini, project manager at Applus RTD.

The tool has been tested in oil and gas operations in Southeast Asia, Australia and the North Sea in water depths of 525-656 feet; the maximum tested depth was in Angola, at 5,249 feet, the companies said.

Scott Dingman, president and CEO of Delta SubSea, said, "Corrosion is an unseen threat to subsea installations, and there is no existing technology that gives the status of a 20-year-old subsea infrastructure. This is the only ROV tool like this in the world."