The key to solving tomorrow’s housing and steel shortages may lie in the junkyards of today, experts in Venezuela say.

A Venezuelan official says the country will start crushing abandoned cars and bicycles to provide raw materials for much-needed housing as the country grapples with a steel shortage.

"We have sent 10,485 automobiles, 9,651 motorbikes and 539 bicycles to the national steel industry," Maria Martinez, a Venezuelan deputy justice minister, recently told Reuters on a visit to an abandoned-car depot near Caracas. 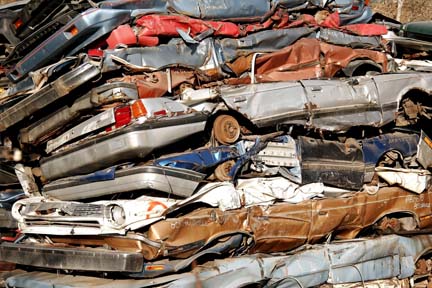 www.sema.org
Steel from recycled cars will be used for new housing in Venezuela.

Steel culled from the crushed vehicles can be used for rebar for concrete used in home construction, officials said.

Lack of steel has been hampering production by the Great Venezuelan Housing Mission, a government-funded program to provide poor families with homes, officials say. The program, an initiative by then-President Hugo Chavez, produced or refurbished 250,000 housing units in 2012 for low-income families. That fell to about 150,000 last year, Reuters reported.

Paulina Villanueva, head of the Villanueva Foundation, a Caracas-based think tank that analyzes urban planning, told Fox News Latino that housing shortages in Venezuela were worse than in many other Latin American countries.

Officials hope that some of the answer is in recycled steel. The U.S. Environmental Protection Agency has estimated that steel produced from secondary sources requires 74 percent less energy that steel made from iron ore.

Steel is the most recycled material in the world, according to the American Iron and Steel Institute. About 88 percent of all steel is recycled, and the amount of steel recycled each year is greater than all other materials combined.

The energy saved by recycling instead of making new steel could provide the electricity for 20 million homes for one year, the institute says.

At least one homebuilder in the United States has tried the same technology being employed in Venezuela. In Portland, OR, a startup called Miranda Homes started using recycled steel studs made from crushed cars in 2007, according to the Oregonian.

The startup was the brainchild of Rob Boydstun, then president of Boydstun Metal Works.

The 2009 article noted that Boydstun had had to lay off 400 employees in the prior year because of the downturn in the auto industry.

"I knew I needed to diversify in order to stay afloat," Boydstun told the news outlet. "Our goal was to build a home that is sustainable but also affordable."

In 2012, Bloomberg Business Week reported that Boydstun Metal Works had gone out of business. However, on Tuesday (June 17), Boydstun's website announced that the company would resume production in August.

Meanwhile Tuesday (June 17), the site for Miranda Homes was no longer operating.