Street art has just received some heavenly cred—product placement with the Almighty.

The work, unveiled Saturday (June 7), is the biggest mural in Houston, TX. The 8,000-square-foot work offers a new take on Michelangelo's "The Creation of Adam" on the ceiling of the Sistine Chapel. 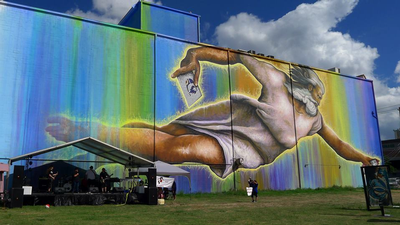 In "Preservons la Creations" ("Let's Preserve the Creation"), by French graffiti artist Sebastien "Mr. D" Boileau, God is not bringing life to Adam; He is wielding a mighty can of spray paint.

A Conversation about Street Art

Born in Versailles, Boileau began creating street art in Paris at the age of 14 and moved his Eyeful Art Murals and Designs firm to Texas in 1998.

He says the block-long mural is designed to stimulate "a conversation about the importance of street art, and other urban art forms, to the culture of a city; calling to attention the worthiness of admiring and preserving these symbols of our urban culture for generations to come."

"The concept of this mural is to appropriate imagery from one of the most admired Renaissance paintings in the world, and to place it within a contemporary environment that references the current urban culture of street art and the long tradition of mural painting," the artist explains on the project's website.

In a video on his studio's website, Boileau calls graffiti an American art form like jazz. He says the mural was inspired in part by the disappearance of much of his own street art.

Boileau and two assistants spent more than a month creating the mural, which is about 180 feet wide and 60 feet tall (about the size of an Olympic swimming pool). 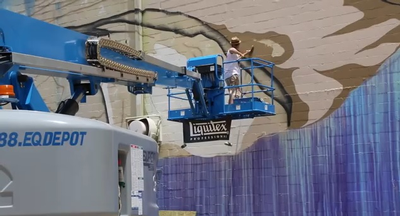 Eyeful Art and Designs
Sebastien Boileau and two assistants created the 8,000-square-foot Houston mural in about one month. All of the materials and the building were donated.

Houston-based UP Studio partnered with Eyeful Art in the project. Sponsors and partners donated the building and the materials: more than 500 cans of spray paint and 150 gallons of wall paint in all. Volunteers filled in with fund-raising, event help, and more.

The project and unveiling Saturday also sought donations to benefit a mural project that begins later this year at Texas Children's Hospital.

Said Boileau: "By placing this Renaissance imagery within this contemporary context, we are using public art to not only beautify but to educate."