A new coating under development in Germany may help medical, culinary, and other environments combat and prevent germ growth for several years.

While antimicrobial coatings have been around for years, researchers at INM (Leibniz Institute for New Materials) in Saarbrucken, Germany, say their coatings kill bacteria and fungi and prevent their growth over the long term. The coating also resists abrasion, the team says. 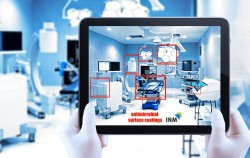 INM is a research and development company that concentrates on nano-composite technology, interface materials and bio-interfaces. The company partners with many German and international companies, and provides R&D to companies throughout the world.

'The Presence of Germs is Zero'

The researchers developed the new coating using silver and copper colloids. The colloids gradually release germicidal metal ions into the environment, according to the researchers.

"The new development combines two properties, which means the presence of germs and fungi on these surfaces is zero," Carsten Becker-Willinger, who heads the Nanomers Program Division at INM, said in a research announcement.

Simultaneously, the coating surface becomes anti-adhesive, preventing new or dead germs from sticking to the surface. Thus, the coating primarily counteracts the formation of an extensive biofilm, according to INM.

“The metal colloids are only a few nanometers in size, but their particular ratio of size to surface area produces a distinctive long-term effect," Becker-Willinger said in the release.

"The 'consumption' of metals to metal ions is then so low that the coating can be effective for several years."

The new coating can be applied to plastics, ceramics or metals via spraying and dipping and are cured by photochemical or thermal processes, according to the researchers.

Selective variation of individual components allows the developers to react to the individual needs of users.

According to the INM, the coatings are especially suitable for use on large and solid surfaces, door handles, and textiles.

The coating is now in the testing phase. INM will present results of the latest tests at TechConnect World Innovation and Conference Expo, set for June 16-17, in Washington, D.C., according to News-Medical.Net.