A Washington state contractor saved a home from toppling over a cliff and into a river for free.

According to various reports, the Eanes watched for years as acres of their riverfront property near Arlington, WA, eroded into the Stillaguamish River.

It was only a matter of time before their house joined the waters too. 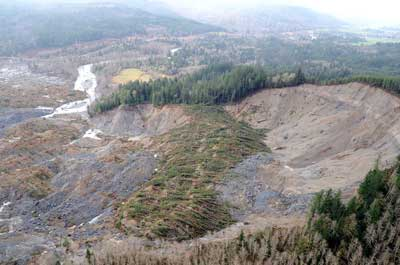 In April, Snohomish County engineers told the homeowners—Keith and Juanita—that their beloved residence was a mere 10 feet from being condemned, KOMO News reported.

They were also told they’d have to continue paying their mortgage if the home did wind up in the river.

Upon learning of the Eanes' situation, Nickle Bros. Inc., a 50-year-old house moving company based in Everett, WA, and Coquitlam, British Columbia, decided to intervene.

The crew upheaved the one-story home and moved it about 50 feet away from the cliff’s eroding edge, reports relate.

They performed the three-day job, which would cost around $25,000, for free, according to a local FOX News affiliate, Q13 FOX.

"Once we saw the nature of this situation we felt like we really needed to step in and help," said Jeff McCord, Nickle Bros, told KOMO News.

"Especially in light of the recent landslides that have occurred in Oso [sic]. It feels so important for people to step in when they can."

The Eanes live about 20 miles from Oso, WA, where a mudslide killed more than 40 people in March.

Nickle Bros did not respond Friday (June 6) to a request for more information about the project.

Others in the community also helped the Eanes.

Interstate Modular reportedly set up the home once it was relocated, and the American Red Cross put the couple in a hotel until their home was ready to be lived in again.

Juanita and Keith said they purchased the property in 2003 and intended to retire there, New York Daily News reported.

The hillside began to erode in 2007 and has gobbled up two out of their five acres of land so far.