When it’s time to pay up at the end of a cab ride, it typically comes down to Driver vs. Passenger. If a fare balks, what’s a cabbie to do?

Strip the guy, paint him, and dump him on the street, say a growing number of fed-up, stiffed cabbies in the western Russia city of Nizhny Novgorod.

The city's cabbies have taken the growing problem of fare deadbeats into their own hands, using a bizarre page from the 2009 movie Avatar and its blue aliens. 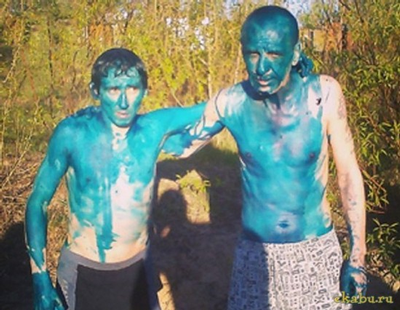 Images: 1tv.ru via YouTube
"They threw me into a pit and doused me with blue paint," said a man who owed $4.32 USD. "After that, I was made to run the streets of the city, looking for money.”

Video reports document the strange new practice, where drivers strip and paint passengers who complain about the fare or refuse to pay all together, report say.

"Their idea is to make the customers resemble Avatar characters, with a sign on the back that says: 'Avatar Fare,'" reports odditycentral.com. (Video shows some of the passengers carrying signs, rather than wearing them.)

Cabbies say they have been struggling futilely for some time with deadbeat customers.

“We have repeatedly brought them to the police station, they were released there,” one driver said.

Their solution has been the new punishment—forcing customers to strip, dumping paint on them, sticking the sign on them, and leaving them in the street.

Some fare dodgers have been forced to wander the streets naked and paint covered, the UK's Metro news site reports.

One furious passenger said he was punished over a fare of 150 rubles (about $4.32 USD).

“They pushed me out of the car, started beating me,” he told a Russian TV station. “Threatened me that if I do not find the money, they will put me on the counter. One minute equals 100 rubles.

"They threw me into a pit and doused me with blue paint. After that, I was made to run the streets of the city, looking for money.”

Locals are divided on whether the cabbies are righteous victims or vigilantes.