Operator error is being blamed for paint and electrical damage on a brand-new, $1.5 billion Australian Navy ship—blame that the operator is strongly disputing.

A civilian contract crew was conducting a sea trial between Melbourne and Sydney of the Royal Australian Navy's NUSHIP Canberra (III) when the hull was damaged and its electrical system melted down, The Daily Telegraph reported. 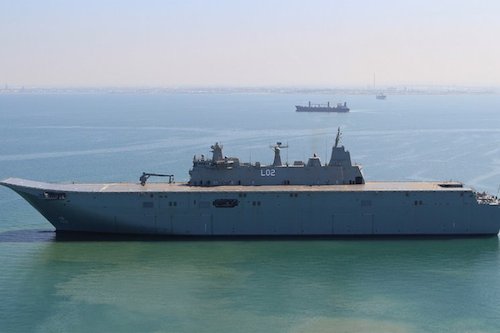 The Canberra class consists of the largest ships ever built for the RAN.

According to media reports, a civilian crew from Teekay Shipping Corp. hired by BAE Systems Australia was testing the ship's performance in May when operator error caused the vessel to vibrate and damage the hull.

The problem was linked to the ship's two propulsion pods, also called azimuth thrusters, that were out of alignment, causing vibrations, the reports said.

Each of the thrusters has two propellers that can be rotated to any angle. However, the civilian crew "was apparently unaware that the pods must be operated in tandem above eight knots," local news outlets reported.

Instead, the crew ran them separately in low-speed mode while at high speed, setting off serious vibrations throughout the ship.

"It was like the shaking floor in an amusement park house of fun," a project source said, according to The Daily Telegraph.

While damage to the structure was minimal, the shaking caused paint to be stripped from the ship's hull in the area above the pods.

The newspaper cited a project source who called the problem an "operator error" and reported that the vibration stopped once the pods were back in the correct mode.

But problems with the ship didn't end there. The crew reportedly lost steering capabilites after an electrical power failure and had to drop anchor for four hours.

According to The Daily Telegraph, this issue was also attributable to the crew, who "forgot to disconnect the emergency power," causing the circuit breakers to melt when the main power came back on.

Additionally, "excessive" corrosion was discovered in propeller nuts and a crack was found in the ship's hull, which was said to have occurred during shipment from Spain.

Despite the list of problems, the project source told the newspaper, "The trial didn't go as well as hoped, but it was better than expected."

A spokesperson for Teekay Shipping Australia denied that the ship's problems resulted from crew errors, according to Dailymail.co.uk.

"[C]laims that the hull of the HMAS Canberra was damaged and that an electrical system melted down are fallacious. The claim that Teekay seastaff were negligent resulting in damage to the vessel is completely false," the spokesperson said.

BAE Systems announced plans to start sea trials in March. These will take the ship from Williamstown to Sydney, where it will be drydocked to have the hull cleaned before final paint application and the deck painted.

BAE Systems did not immediately respond to a request for comment Thursday (June 5).

The Canberra is expected to have a second sea trial in July before RAN takes control of the ship.

BAE Systems and Navantia built the ships using a modular approach; the ships were divided into 112 modules that were built and fitted out as discrete units and then welded together. This method allows the ship to be built at several different sites throughout the shipyard, the RAN explained.

The vessels have a conventional mono steel hull design with the superstructure located on the starboard side of the flight deck.

Construction of the hull to the level of the flight deck and the majority of the fitting out was done at Navantia's shipyard in Ferrol, Spain.

The consolidation of the superstructure and installation of the combat and communication systems were done at BAE Systems' shipyard in Williamstown, Victoria.