SSPC has thrown its weight behind a leading UK painting and blasting training curriculum as part of an effort to expand the program worldwide.

The MPI Group calls its "Train the Painter" Program "an innovative and unique coating applicator training program ... written and developed by industry experts."

The "comprehensive training platform" includes classroom and hands-on training and assessment in protective coatings application, spray painting, and abrasive blast cleaning, according to the MPI Group. There is also a "Train the Trainer" program developed for the protective coatings industry.

All modules are continuously updated, according to MPI. 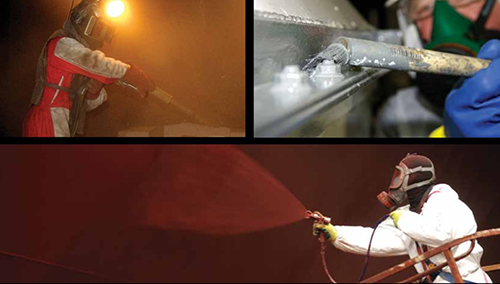 Train the Trainer / MPI
The MPI Group, which developed "Train the Painter," called SSPC "a natural partner" for the program.

(Founded in 1981, The MPI Group is a training, marketing and publishing company. It has no connection to the Canada-based Master Painters Institute, also known as MPI.)

Train the Trainer now carries SSPC's prominent endorsement, the organization announced this week. The partnership will bring both organizations' "resources and expertise to a much larger audience," according to the announcement.

"This is an important milestone in the process of raising the quality of coating applicators in the industry,” SSPC executive director Bill Shoup said in a statement.

"There is a recognized need for improved workforce training around the world—both in established economies with an aging population of skilled workers and emerging economies where quality standards are starting to take hold."

MPI group managing director Andrew Deere called SSPC "a natural partner for the program. We are delighted to have the support of such an influential organization within the industry.”

Used extensively in the UK, Train the Painter was written to meet the SSPC ACS 1/NACE No. 13 Applicator Certification Standard, said Deere.

Thus, "once they meet the experience requirements, students who successfully complete the course can eventually sit for the Coating Application Specialist (CAS) certification exam administered by SSPC."

The program is flexible, but participants must first complete the Protective Coatings Application module (Core Unit 1) before taking other courses.

Each unit takes from two to five days to complete, according to the program website. The cost of the training was not posted.