A foundry owner critical of federal health and safety regulations is now dealing with a horrific workplace accident that sprayed his workers with molten metal.

Lance Johnson, whose family has run Johnson Brass & Machine Foundry Inc. (JBM) since 1905, complained to the Wall Street Journal in 2012 that safety enforcement by the Obama Administration was hurting his business.

"I've never been audited by more government agencies in my life than I have under Obama," Johnson said in an article on the eve of the U.S. presidential election.

Johnson, president of the company since 1993, said he had spent "well into the six figures" to address workplace hazards cited in inspections by the Occupational Safety and Health Administration. 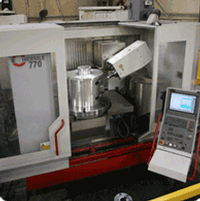 Photos: johnsoncentrifugal.com
Johnson Brass & Machinery (aka Johnson Centrifugal Technology) calls itself "the most sophisticated centrifugal castings and formings foundry in the United States."

"I would have spent that on more equipment," Johnson told the paper. "That would have created more jobs down the line."

His statements echoed those of many other business owners who were then supporting Republican presidential nominee Mitt Romney, in part because of President Obama's regulatory enforcement policies.

On Monday (May 19), Johnson's plant in Saukville, WI, was the scene of a "catastrophic" machinery failure that spewed molten metal around the area, burning seven workers and sending others fleeing, the Milwaukee Journal Sentinel reported.

The accident apparently occurred while the brass was being poured into a centrifuge. The centrifuge spins about 450 revolutions per minute, and the brass had been heated to 2,100 degrees, Saukville Fire Chief Gilly Schultz told the Journal Sentinel.

The accident also caused what reports called "a small fire" at the company, which is also known as Johnson Centrifugal Technology (JCT).

At least four workers were reportedly being treated at burn centers later, and the rest were being treated at hospitals, reports said. No update on their conditions was available Friday (May 23).

'Better Quality at a Lower Cost'

The company bills itself as "the most sophisticated centrifugal castings and formings foundry in the United States."

Its website says JCT provides copper, cast and wrought aluminum, Monel, nickel, silver, stainless steel and other metal components using a vertical centrifugal cast process "of equal or better quality at a lower cost than the alternative process." The company's products are distributed internationally to the power generation, hydropower, naval shipping and other industries.

Local authorities originally reported an explosion at the site, but police said later that no explosion had occurred.

OSHA was investigating the accident.

A check of OSHA records Friday showed that JBM/JCT was inspected twice in 2011 and once in 2010. An inspection on Jan. 11, 2011, resulted in 12 citations for health and safety violations.

Three serious and four other-than-serious safety violations carrying $9,638 in fines were eventually settled with a $5,015 fine. Two of the serious violations involved lockout/tagout hazards; the third involved requirements for all machines.

In a statement released after Monday's accident, Johnson said: "For more than one hundred years, my family has taken great pride in our safety record and our close relationship with our employees."

"As the fourth president of this family-owned business, I can say we are all deeply saddened by the accident at our plant."