An extensive, 33-month long, $15 million repair program to mend cracks and chips atop the Washington Monument has been completed.

The 130-year-old stone monument, which sustained the damage during the earthquake that rattled the eastern U.S. in 2011, reopened to visitors May 12, according to the National Park Service. 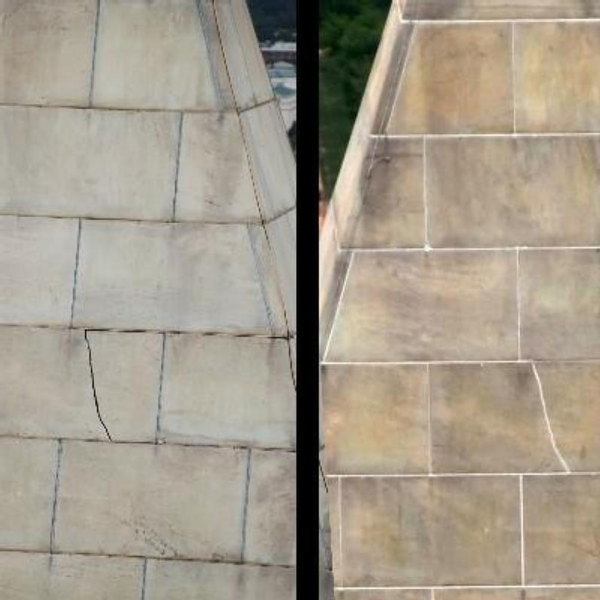 Images: National Park Service
More than 150 cracks in the Washington Monument were repaired during the restoration project.

The 555-foot-tall icon, designed by architect Robert Mills, was heavily damaged in the quake Aug. 23, 2011. A  dramatic National Park Service video shows chunks of mortar and limestone raining down on visitors when the 5.8 magnitude quake rocked the structure. (The quake begins at about 1:45 in the video.)

Built in 1884, the national landmark honors the first U.S. President, who served from 1789 to 1797. The monument was the world's tallest manmade structure until the Eiffel Tower was constructed in 1889.

The Pyramidion (point top), between elevations 475 and 530 feet, sustained most of the damage, assessments found.

This report provided a look at the high-wire investigation conducted in late September and early October of 2011.

Once a plan for repairs was secured, it took almost 20 months to design and build the scaffolding to provide workers access to the stonework, reports said.

The team also performed a low-pressure wash of the stonework, according to reports.

Sylmar, CA-based Tutor Perini Management Services Group led the repair program, finishing on time and on budget, according to the National Park Service.

The repair bill was $15 million. Half of the cost was donated by philanthropist David Rubenstein via the Trust for the National Mall.

The other half was provided by government funding.

“David’s support of the national parks and the work of the National Park Service sets a high standard for park philanthropy nationwide and is appreciated by every visitor who will learn something about President Washington or simply enjoy the view from the top,” National Park Service Director Jonathan B. Jarvis said in a statement.