Time supposedly heals all wounds, but it may not be able to repair the brain problems caused by longtime on-the-job exposure to industrial coatings and other solvent-based products, a new study shows.

Sustained, high-level exposure to vapors from industrial paints and coatings, adhesives and other solvent-based products may compromise brain function in workers decades after they have left the job, according to research conducted by a team at the Harvard School of Public Health.

“This study adds to the mounting evidence not only of the harmful effects of solvent exposure on cognitive function in the short term, but also of the health effects that may last long past the time of exposure," Dr. Erika L. Sabbath, the study leader, told PaintSquare News by email Tuesday (May 13). 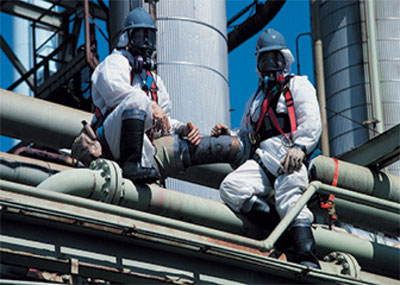 U.S. Bureau of Labor Statistics
The study looked at retirees, rather than active workers, who are presumably healthier if they are still on the job. More than 2,100 retirees participated.

Some of the retirees showed problems 30 to 50 years after their exposure—a finding that Sabbath called "really surprising."

The findings have major implications for exposure limit policies for industrial painters, construction workers and others who have high, ongoing exposure to solvent-based products, says Sabbath.

The potential for damage is particularly high for today's workers, who stay on the job longer and longer, Sabbath noted.

Her study, "Time may not fully attenuate solvent-associated cognitive deficits in highly exposed workers," has just been published in Neurology, the journal of the American Academy of Neurology.

"Solvents pose a real risk to the present and future cognitive health of workers, and as retirement ages go up, the length of time that people are exposed is going up, too," said Sabbath.

The research examined memory, attention and processing speed in 2,143 retirees who had been potentially exposed to three types of solvents in their careers:

All three solvents are widely used in various products throughout the paint and coatings industry.

The workers' average lifetime exposure was ranked as none, moderate or high, based on company records, the nature of their jobs, and on when their last exposure occurred.

Participants took eight tests of their memory and thinking skills an average of 10 years after they retired, when they were an average age of 66. (Ninety percent of workers retired between ages 50 and 60.)

Researchers also accounted for factors such as education level, age, smoking and alcohol consumption. They did not control for factors such as cardiovascular disease, diet or physical activity and concede that these may play a role in cognitive functioning.

People with high, recent exposure to solvents were found to be at greatest risk for memory and thinking deficits.

For example, those with high, recent exposure to chlorinated solvents were 65 percent more likely to have impaired scores on tests of memory and visual attention and task switching than those who were not exposed, according to an AAN research announcement.

“The people with high exposure within the last 12 to 30 years showed impairment in almost all areas of memory and thinking, including those not usually associated with solvent exposure,” Sabbath said.

“But what was really striking was that we also saw some cognitive problems in those who had been highly exposed much longer ago, up to 50 years before testing.

"This suggests that time may not fully lessen the effect of solvent exposure on some memory and cognitive skills when lifetime exposure is high.”

The study says it is one of the first to study such exposures by examining retirees. Some exposure studies have used active workers, but these groups are more likely to include more healthy workers, since compromised workers were more likely to have left the job or retired, the study said.

"I’m very excited about this work reaching those in industries that use solvents regularly.

"Employers and supervisors who use solvents in their work are in a unique position to be able to make a real difference in the types and concentrations of solvents to which workers are exposed.”

The study does not make recommendations for reducing exposures. For those, Sabbath said, she defers to industrial hygienists.