PPG Industries Inc. says it will introduce a revamped version of its Duranar ADS (air-dried system) fluoropolymer coatings this summer—three years after the products were withdrawn from the market.

According to the company’s coil and building products coatings group, the new generation of coatings for architectural metals are based on a newly formulated fluorinated copolymer resin combined with PPG proprietary chemistry.

The high-performance coatings are designed to repair fluoropolymer coatings on architectural metals damaged during production or after field installation, PPG adds. 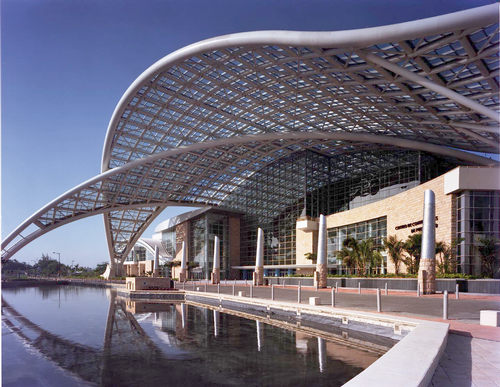 PPG Industries
The reformulated Duranar ADS coating can be spray-applied in the field to repair or refurbish weathered metal roofing or siding panels. Duranar coatings were used on the Puerto Rico Convention Center, shown above.

The one-component formulation can be applied by fingernail brush for small touch-ups at the end of a production line or be spray-applied in the field to repair or refurbish weathered metal roofing or siding panels, according to PPG.

The new coatings will come in a wide range of color options, including solid, metallic, pearlescent and infrared-reflective (IR-reflective) pigment technologies, the company says.