Lessons from a Billion-Dollar Spill

Pipeline owners and operators had better learn from the many mistakes that led to a massive Midwestern spill in 2010 or face costly consequences, U.S. regulators are warning.

Pipeline Safety: Lessons Learned from the Release at Marshall, Michigan, an advisory bulletin published April 30 by the U.S. Pipeline and Hazardous Materials Administration, might alternatively be titled, "Do As We Say—Not as Enbridge Energy Did."

The advisory bulletin contains a lengthy list of deficiencies that federal investigators identified in Enbridge's maintenance, communications, operations and response programs after a 30-inch company pipeline ruptured at 5:58 p.m. July 25, 2010, in a wetland near Marshall, MI. 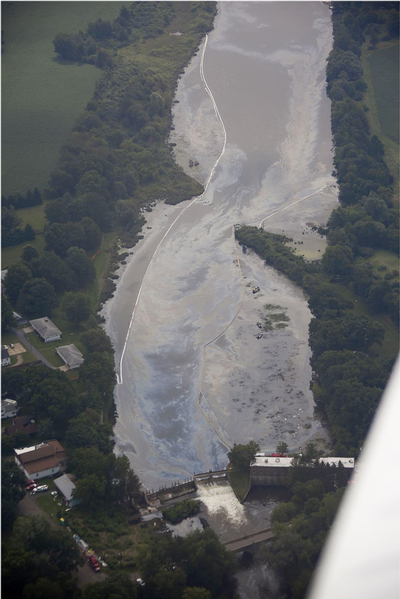 Photos: EPA
The spill went undetected for more than 17 hours, eventually releasing 843,333 gallons of crude oil into the wetlands, Talmadge Creek and the Kalamazoo River.

The rupture was not discovered for more than 17 hours, during which time Enbridge operators twice pumped additional oil into the line rather than investigate why the flow had dropped.

The disaster released 843,333 gallons of crude oil into the wetlands, Talmadge Creek and the Kalamazoo River, launching a $1+ billion cleanup and remediation project that continues today.

In August 2012, PHMSA levied its largest penalty ever to Enbridge—$3,699,200. Also in 2012, the agency had a record year for proposed pipeline fines and took the second-highest number of enforcement actions against pipeline operators.

The National Transportation Safety Board, which investigated the break, determined that the probable cause was stress corrosion cracking that grew and coalesced from disbonded polyethylene tape coating.

Beyond the hardware problems, however, were a wealth of training, risk assessment, integrity management and procedural lapses that allowed the spill to spread to disastrous proportions—and without the public's knowledge.

These are some of the deficiencies highlighted by the new bulletin.

Federal regulations require operators of gas transmission and hazardous liquid pipelines to develop a continual process for evaluating pipeline integrity. The dynamic process is supposed to integrate prevoius assessments, data and actions to develop a unique risk profile for each pipeline.

Enbridge did not do that, PHMSA said. For example, it said:

Among the deficiencies PMSA cited in operations and training:

The bulletin advises pipeline owners and operators to "evaluate their safety programs and implement any changes to eliminate deficiencies similar to the ones" NTSB identified in Enbridge.

"Had existing regulations, guidance, advisories and recommendations regarding these programs been properly acted upon, the consequences of that incident could have been prevented, or at the very least, mitigated."

And in a pointed final warning, the agency said:

"Operators should proactively implement improvements to their pipeline safety programs based on these observations and recommendations, so that the entire industry can benefit from the mistakes of one operator."