As victims recovered, investigators continued to search Wednesday (May 7) for the cause of a massive roof collapse at the old Bethlehem Steel Mill near Baltimore, MD.

Nine workers were hospitalized, including some critically injured, after the roof of the former Sparrows Point mill gave way at 10 a.m. Monday (May 5) during demolition, authorities said.

All 13 workers who were in the building at the time were accounted for, according to their employer, Detroit-based demolition contractor MCM Management Corp.

MCM was acting as a subcontractor for Hilco Global, which is liquidating the plant and clearing the property, reports said. 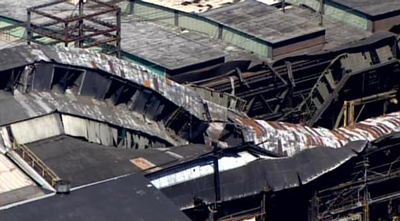 Photos: CBS/WBAL-TV screen grabs
Thirteen workers were inside the old Bethelem Steel plant when the roof caved in. Despite some critical injuries and falls of up to 40 feet, the nine injured workers are expected to recover.

Baltimore County Police reported Tuesday that some workers were apparently dismantling part of the building while others were conducting asbestos removal. An asbestos crew was working from a light truck 40 feet in the air when the structure caved in around them.

About 65 personnel from Baltimore County Fire Department responded to the scene, along with 25 pieces of apparatus. Seven medic units, along with two helicopters from the Maryland State Police, treated and transported the injured.

Nine workers were injured in all, although early accounts erroneously reported five injured, authorities said. Most of the injured were identified as asbestos workers.

Police reported later that day that two of the workers remained in critical condition and one in serious condition. All were expected to recover.

The nine workers are from Maryland, Michigan, Ohio and Georgia and include a father and son.

Eleanor Burkett, the mother of one of the injured workers, told the Baltimore Sun that her son had fallen 30 feet in the collapse and was "doing as well as can be expected."

Added Burkett: "The whole thing just caved in on everybody."

Maryland Occupational Safety and Health (MOSH) was investigating the cause of the collapse. A full report is not expected for several months.

MCM Management has been on the Sparrows Point site for about a year and a half, and the Occupational Safety and Health Administration has issued no citations against the company on this project. OSHA inspected the company at the site in November 2013, according to OSHA records.

"MCM has initiated an investigation into the incident and is working with state and local authorities to determine the cause," the company said in a statement. "MCM is focused on the recovery of its nine workers and asks the public to keep them and their families in their thoughts and prayers."

Apparently coincidentally, inspectors from the Maryland Department of the Environment were on their way to site for a periodic inspection when the collapse occurred, a DEP spokesman told the Sun.

The toll would have been worse if the building had not collapsed in the middle, fire officials told WBAL-TV.

"A cantilever collapse is when the roof will fail in the middle and fall like this, where with a pancake collapse, the whole roof is on top of them," Baltimore County Fire Department Lt. Paul Massarelli told the news outlet.

"So this way it gave them areas to escape from, where otherwise it would have been—they probably would not have had a place to escape."

Michael Lewis, an official with the local Sparrows Point union, told the Sun that the incident could have been worse.

"It's sad," he said, "because the guys are down there just trying to make a living."