A global trade union has become the latest player to recruit military veterans for the dwindling ranks of the U.S. construction workforce, especially in the area of military maintenance.

The training is "perfectly suited to military personnel" and includes job-placement assistance and college credits, program officials said. For the U.S. military, the program offers a pipeline of trained workers for its multibillion-dollar war on corrosion. The training will be conducted near U.S. military bases. 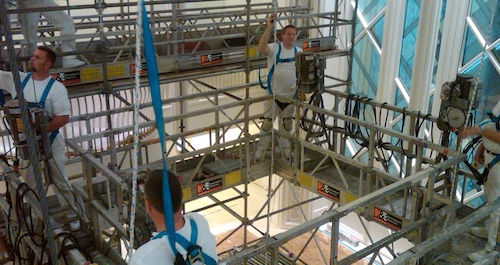 PAT-VP.org
"We created the Painters and Allied Trades Veterans Program to not only build our own ranks with the best and brightest the country has to offer, but to also do our part to thank the brave men and women of our military for their service," said Kenneth Rigmaiden, IUPAT General President.

In the future, the program will expand to drywall finishing, floor installation, and other skills.

The IUPAT program is the latest initiative that aims to fill the yawning need for skilled construction labor in the United States with the ranks of former service members. In February, a coalition of construction employers and associations working with the White House pledged 100,000 "good-paying jobs" for U.S. veterans in the next five years.

The huge task of preventing and repairing that damage has created a demand for trained workers with specialized skills, says the union, which represents North American workers in the the finishing trades: commercial and industrial coatings, glazing and glasswork, drywall finishing, floor covering installation, and sign and display.

PAT-VP is initially concentrating on training in industrial coatings—a fast-growing career path due to planned and current investment in U.S. infrastructure and the construction and maintenance of energy facilities, according to IUPAT.

The Finishing Contractors Association (FCA), which represents union employers, is also participating in the program, which is free to transitioning service members and veterans.

"We created the Painters and Allied Trades Veterans Program to not only build our own ranks with the best and brightest the country has to offer, but to also do our part to thank the brave men and women of our military for their service," said Kenneth Rigmaiden, IUPAT General President.

The men, all from Joint Base Lewis-McChord in Ft. Lewis, WA, have now been placed in jobs in the U.S., IUPAT said.

"We at the FCA are proud to partner with the IUPAT in this great program," said FCA chairman Mike Cassidy.

"I know first-hand how valuable veterans are to have on a job site in terms of discipline, learning new skills and a daily commitment to getting the job done the right way."

IUPAT says its intensive training program lets transition and former service members "earn while you learn" and qualifies graduates for a wide range of jobs that cannot be outsourced overseas. The career pathways include:

The program also supports graduates in transitioning from military to civilian employment.

"This program will put IUPAT signatory companies and the IUPAT workforce at the top of the list to receive great American veterans seeking another place to make a positive difference. What an outstanding win-win way to enhance our collective workforce," said Cassidy.

Earn While You Learn

The pilot program starts with intensive training designed for service members. Trainees will complete an apprenticeship that includes paid work alongside an experienced journey worker.

Field lessons are delivered by a Learning Management System that translates to college credits from Mountwest Community & Technical College in Huntington, WV.

Graduates leave the classroom with six Certificates of Completion in the following career subjects: