“Galvanized” describes steel or iron surfaces shop-coated with a layer of hot-dip zinc.

Galvanizing alone can last for decades in mild conditions, but organic coatings may be applied as topcoats to add color or to extend the life of the structure, especially in aggressive environments.

The Problem with Pre-Treatments

Galvanizers sometimes pre-treat the surface with chromates or other passivating treatments to prevent the formation of “white rust” during transportation or storage of the galvanized parts. 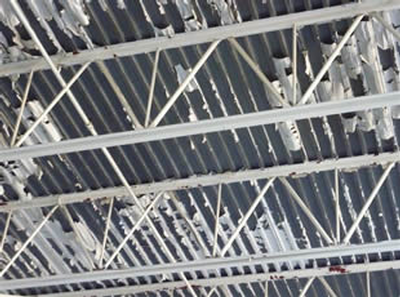 However, these treatments can interfere with adhesion of the applied coating, so specifiers must take care to require that galvanized surfaces not be passivated if the parts are to be painted. If any passivation treatment is present, it must be removed before coating application.

Newly galvanized surfaces should always be tested for chromates unless it’s absolutely certain that no chromate treatment was applied.

Newly galvanized metal is shiny and smooth with virtually no anchor pattern. A very common cause of paint failure is coating over an un-dulled and excessively smooth galvanized surface.

Proper surface preparation may start with SSPC SP-1 Solvent Cleaning to remove oil and grease contamination. But if the galvanized surface is shiny, the surface must also be de-glossed and roughened in one of two ways:

Most problems with coating galvanized surfaces can be minimized or eliminated if surface preparation is appropriate and complete and if the proper primer and topcoats are specified, as illustrated in these two jobsite examples.

Exterior galvanized steel parts in a shopping mall were topcoated for aesthetic purposes but gradually exhibited widespread dramatic failure, especially on the handrails and high-traffic surfaces.

While it might be acceptable for a topcoat to show wear, chalking or fading over time, the owner was not prepared to watch his paint fall off in big chips down to the metal in the five years after painting. Ultimately, a consultant was called in to determine the cause of the failure.

Inspection verified that no primer had been used to promote a bond over the galvanizing. When painting galvanized surfaces, the primary role of the primer is not corrosion resistance—the zinc galvanizing is designed to do that—but to provide a bond sufficient to promote adhesion for the topcoat.

The primers commonly used today are either waterborne acrylic products designed for galvanized surfaces such as MPI #134, or products such as MPI #101 Epoxy Primer for aggressive environments.

For this mall project, a high-performance latex had been applied directly to the bare unprimed galvanized surface, and this certainly may have contributed to premature failure.

But the real culprit was surface preparation (or, more accurately, lack thereof): The galvanized steel under the failed coating was found to be still shiny, indicating that no preparation had been used to roughen the surface. It is noteworthy that the job specs did not require inspection of the painting work—and the painting contractor clearly didn’t follow the specifications.

This failure could have been avoided if the newly installed galvanized structures had been washed down with an etch primer (such as MPI#25) to roughen and dull the surface, allowed to dry for one day, and then primed with a water-based acrylic primer such as MPI #134 before applying the high-performance latex topcoat.

Another project involved remodeling an old building where the galvanized steel Q-deck had been painted many years earlier with an alkyd dryfall coating. The paint film appeared intact when the new owner acquired the building.

But one rule for topcoating galvanized is: Do not apply alkyds directly over unprimed galvanized surfaces. The zinc in the galvanizing produces alkaline salts that can react with the alkyd and lead to "saponification" failure with blistering, peeling, and poor adhesion.

Furthermore, these failures can remain hidden from view. Even with virtually zero adhesion between the coating and the substrate, the paint film can essentially lay intact on the surface as long as no stress (hand contact, abrasion, expansion/contraction) is applied.

Sure enough, when the building was opened up and the steel deck was subjected to high humidity and expansion/contraction from thermal shock, wholescale delamination ensued, with the loose coating shaking from the surface in sheets larger than the inspector’s foot.

The only solution was complete removal of the alkyd coating using a chemical stripper and power washing—an unwelcome expense that certainly wasn’t anticipated by either the general contractor or the new owner!

Galvanized metal can be a troublesome substrate for paint application for these and other reasons. In addition, since different galvanizing shops may employ different surface treatments or processes, what worked well with one project may not necessarily work for another.

Since it can be challenging to obtain consistent results from one project to another, a facility owner may find it difficult to obtain a guarantee from the contractor or coating supplier.

However, rigorous attention to the practices described here can help to assure a successful project.

About the Author: This article was written by PQA Inspector Dave Lick and is reprinted with permission from the MPI (Master Painters Institute) newsletter. MPI content describes best practices for commercial, institutional, and light industrial painting.