Cortec has introduced a waterborne acrylic for metal substrates in aggressive environments.

CorShield VpCI-386 HP is a fast-drying primer/topcoat film that is designed to form a tough, non-flammable protective barrier for both interior and unsheltered exterior conditions. 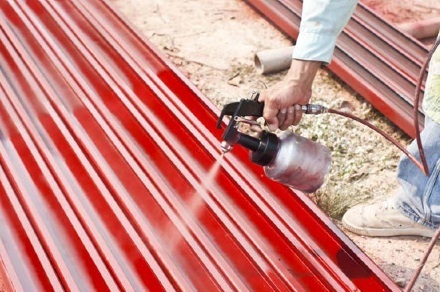 Cortec
Cortec's new VpCI-386 HP is designed for use on metal substrates in indoor and aggressive outdoor environments.

VpCI-386 HP can bond to metal substrates in aggressive environments and is recommended for applications where the use of toxic metals is a concern, according to Cortec.

The coating uses Cortec's Nano-VpCI fomulation, which contains a mixture of non-toxic organic inhibitors and pigments.

The combination of additives provides a nanoparticle composite polymer barrier that impedes the reaction of metal ionization by ion scavenging and passivation, according to Cortec.

The corrosion resistance of VpCI-386 HP has been improved by replacing traditional materials with non-toxic, heavy metal-free corrosion inhibitors, the company says.

According to Cortec, this composition eliminates worker exposure to organic solvents and to fire hazards in confined spaces.

The coating can be applied by spray, roll, brush or dip and dries to the touch in 40 minutes at 77°F with a full cure in seven days at the same temperature.