Bee-swarm-intensity construction projects are nothing new for China. After all, it took one builder just 15 days to construct a 30-story hotel there.

However, a building materials producer may have discovered the secret to even faster construction—using powerful printing technology in lieu of labor. 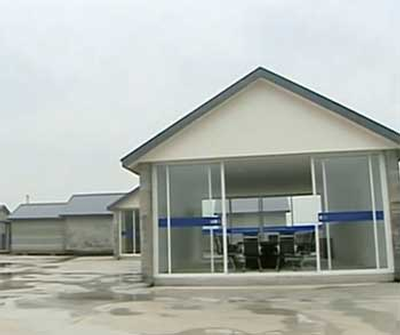 The houses are made using blocks composed of quick-drying concrete, sand, glass fiber, and construction waste. This video captures the innovative building process.

The 3D-printed homes are both environmentally friendly and cost effective, according to Ma Yihe, who invented the industrial-sized printers used.

“To obtain natural stone, we have to employ miners, dig up blocks of stone, and saw them into pieces. This badly damages the environment,” Yihe told the state news agency Xinhua.

“But with the 3D printing, we recycle mine tailings into usable materials. And we can print buildings with any digital design our customers bring us. It's fast and cheap,” Yihe said.

The houses can be built for less than $5,000 USD each, and the process spares workers from hazardous or dusty work environments, Yihe said.

As the blocks are printed out, the company reportedly conducts quality checks. There aren’t any building codes for 3D printed buildings in China yet, Xinhua reports.

WinSun hopes to use the technology to address housing shortages and, eventually, build skyscrapers, according to reports.

Architects in Amsterdam are also experimenting with 3D printing buildings.

That project, however, is expected to take three years.