A Coating Cure for the Car-Wash Blues?

If you’ve resisted buying a white car for fear it would show too much dirt, fear no more.

Nissan has developed a new coating that repels mud and rain, potentially eliminating the chore of car washing.

European engineers are testing the coating on the Nissan Note, the auto manufacturer announced Thursday (April 24).

The paint, developed at the Nissan Technical Centre in the UK, is hydrophobic and oleophobic, meaning it repels water and oils. 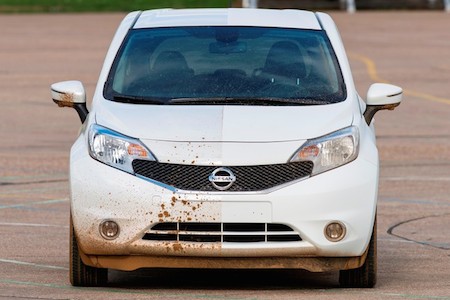 Photo, video courtesy of Nissan
Nissan is testing out new car coatings that repel mud and water. If all goes well, consumers may see this as a future aftermarket option.

The coating stops dirt from sticking to the car's surface by creating a protective layer of air between the paint and the environment.

So far, the coating has responded well to rain, spray, frost, sleet and standing water, according to the car manufacturer.

Nissan says it's the first carmaker to apply the technology, called Ultra-Ever Dry, to automotive bodywork. The coating is marketed and sold by UltraTech International Inc.

Engineers will assess the coatings in a variety of conditions over the coming months, Nissan says.

Nissan does not plan to include the paint as a standard option any time soon, but the company might consider it as a future aftermarket option.

"The Nissan Note has been carefully engineered to take the stress out of customer driving, and Nissan's engineers are constantly thinking of new ways to make families' lives easier," said Geraldine Ingham, chief marketing manager for Nissan Note.

"We are committed to addressing everyday problems our customers face and will always consider testing exciting, cutting-edge technology like this incredible coating application," Ingham says.

Now, if only someone could find a way to make crumbs and coffee stains magically disappear from the interior...