Using project specs and standards to achieve surface cleanliness before coating application is the focus of the newest installment in the PaintSquare Video Learning Center series.

"Surface Cleaning" is one of 19 videos in the original instructional series, which explores multiple aspects of protective coatings work. 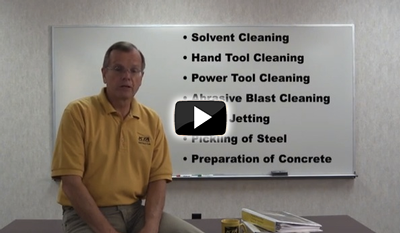 Images: KTA-Tator Inc.
"Surface Cleaning," part of the PaintSquare Video Learning Center series, discusses the degree to which surface debris must be removed before applying coatings.

Created and narrated by experts at KTA-Tator Inc., the series of concise videos covers a wide range of topics, from quality-control and health and safety issues, to basics on the proper use of coatings instruments.

In this video (5:56), KTA's Ken Trimber discusses the degree to which rust, old paint, mill scale and other surface debris should be removed been applying coatings.

"At a very early age, many of us learn that you don't apply new paint over rust or old paint," says Trimber. "Almost intuitively, we believe that until the surface is perfectly clean, the coating should not be applied."

SSPC has several surface cleanliness standards that are numbered chronologically from SSPC-SP 1 to SSPC-SP 16, plus SSPC-WJ 1 through SSPC-WJ 4 for waterjet cleaning.

In addition, SSPC's four visual guides give before and after photographs to help assess whether surfaces have been prepareped to project specifications before painting, Trimber explains.

"In the event of a dispute, it is the written standard and not the guide that is the governing document," Trimber says.

PaintSquare expects to present a new Learning Center video from the series every two weeks. Future topics in the series include:

The full series will be available free in the PaintSquare Video Learning Center.