It’s not an outright ban, but a new South Carolina law may limit the use of LEED on state projects by imposing restrictions on certain credits. 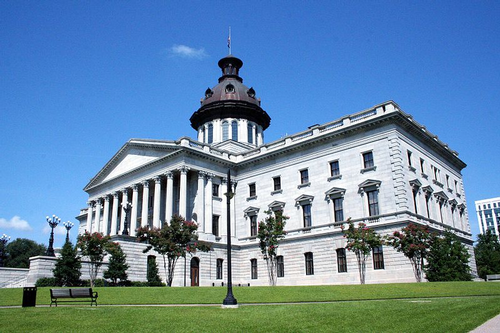 Florencebballer / Wikimedia Commons
Lawmakers in South Carolina have passed a law that restricts the use of green-building rating credits or points for building product disclosures that require material ingredient reporting.

Supporters say the new law represents a “compromise” between manufacturers and environmental groups and is a "major victory" for the green building and construction industry.

The legislation targets new credits, specifically those related to material transparency, incorporated into the U.S. Green Building Council’s recent LEED v4 update, according to a report in Ecobuilding Pulse.

The law says that a major facility project requesting third-party certification “shall not be allowed to seek a rating credit or point for building product disclosure and optimization credit that requires material ingredient reporting.”

In addition, the law allows for the formation of a committee of stakeholders to review new third-party certification versions or updates immediately after their release and before their effective date.

The state committee can dismiss LEED credits it deems unnecessary, although it cannot drop a building’s total credits below the 50-credit threshold needed for LEED Silver certification, Ecobuilding Pulse reported.

The original legislation, introduced in February by Republican State Reps. William E. “Bill” Sandifer II and Dwight A. Loftis, sought to ban the use of LEED in new major state-funded facilities by 2015.

However, after “contentious debate,” it was modified as a compromise between manufacturers and environmental groups, the report noted.

On its blog, the American Institute of Architects-South Carolina Chapter called the modified bill’s passage a “major victory” for the sustainable design and construction industry. The chapter said the approval was the culmination of “many months and many maneuvers” to turn the “elimination bill” into one that maintains the use of green building rating systems.

The USGBC calls the legislation a “win” because the system was not banned, but also sees it as a hit by the “timber and chemical lobbies” to weaken the program.

“South Carolina remains committed to LEED as a critical part of our future,” said Michael Criss, chair of the advocacy committee of the USGBC South Carolina Chapter.

“However, [the law] continues efforts by the vested interests of the timber and chemical lobbies to weaken the use of LEED.

“Instead, South Carolina should be expanding the many benefits of green building, and LEED in particular, to schools and other state-funded buildings that will save taxpayer money and improve occupant health,” he said.

The legislation is part of a growing trend of anti-LEED state-level policies that have been rolled out over the past year, reports relate.

Recently, Ohio has moved to ban the use of the LEED certification program in the state; see “Ohio Advances Ban on LEED.” Other states such as Florida, Mississippi, and Alabama have introduced similar measures for debate, according to Ecobuilding Pulse.