A 67-year-old construction contractor may spend the rest of his life in prison after admitting that he forced his employees to kick back wages and assaulted a project manager at Fort Dix in New Jersey. 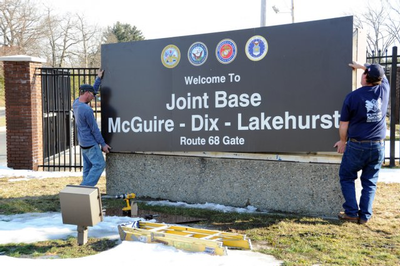 U.S. Army
The case involves a subcontractor that provided HVAC and plumbing work during the 2009-2010 restoration and rehabilitation of the Marine Corps Reserve Training Center at Joint Base-McGuire-Dix-Lakehurst in Burlington County, NJ.

Santos was originally charged in a five-count indictment on March 4, 2013. The remaining three counts will be dismissed upon sentencing, according to the U.S. Attorney's Office.

A third supervisor—general manager Alex Rabinovich, 58, of Richboro, PA—pleaded guilty Sept. 18, 2013, to conspiracy to bribe a representative of a prime contractor of federally subsidized construction projects. He is also awaiting sentencing.

Sands Mechanical was hired in November 2009 as a subcontractor to provide HVAC and plumbing work during the restoration and rehabilitation of the Marine Corps Reserve Training Center at Joint Base-McGuire-Dix-Lakehurst in Burlington County.

The general contractor, a Maryland company, was not implicated in any wrongdoing.

During the project, prosecutors said, Santos demanded that certain employees kick back a percentage of their weekly paychecks or they would be fired. He advised the workers that the kickbacks were a part of a "program" they were obligated to accept, according to the court documents.

In February 2010, the U.S. Department of Labor’s Wage and Hour Division was tipped off that Sands employees were being forced to kick back portions of their salary and were not being paid the prevailing wage for Burlington County.

The Labor Department obtained a civil judgment to settle the violations.

Santos agreed to repay $80,000 to those who were owed back wages, cutting settlement checks in June 2010.

However, supervisors Cottone and Featherston warned those employees not to cash their settlement checks, according to court documents.

Instead, the supervisors took the employees to a nearby check-cashing business, where the employees endorsed their checks over to Cottone, who cashed them and returned the funds to Santos, according to prosecutors.

Because these kickbacks were removed from employees’ checks, Santos routinely submitted inaccurate weekly payroll forms that are required on federally subsidized construction projects, the prosecutors said.

The site manager, who was unidentified in the court documents, was said to have been “routinely critical” of the work Sands’ employees performed, which, at times, had to be redone. He was also said to have questioned Sands' business practices.

To warn off the manager, Santos, Cottone and others were alleged to have had the manager’s truck torched in front of his residence at 4 a.m. on May 17, 2010, according to documents in the case.

A few weeks later, the manager was "targeted" once again.

Before dawn on June 9, 2010, while riding his bike, the site manager was intentionally run down by a car driven by Cottone’s nephew and two friends, prosecutors said. The victim suffered multiple serious injuries.

Santos pleaded guilty to causing the actors to drive from Pennsylvania to New Jersey with the intent to commit aggravated assault against the site manager. The court documents say Santos paid approximately about $4,000 to repair the vehicle damaged during the assault.

In addition to the U.S. Attorney and agencies of the Labor Department, the Naval Criminal Investigative Service and Air Force Office of Special Investigations assisted in the investigation.