Tens of millions of Catholics in the Philippines are being warned against kissing, rubbing and other hands-on veneration of statues in the run-up to Easter, due to high amounts of lead paint found on the icons. 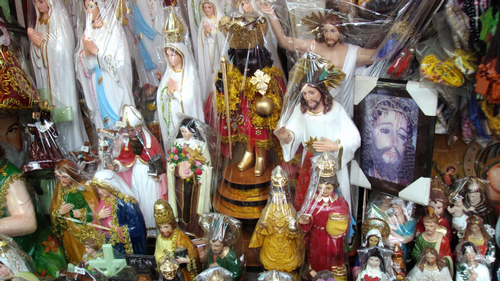 EcoWaste Coalition
Objects of reverence for tens of millions of Filipino Catholics, small religious statues have been found by a watchdog group to contain excessive levels of lead-based paint.

As the predominantly Catholic country of 96 million marks Holy Week, the nonprofit EcoWaste Coalition is reporting levels of lead hundreds of times the legal limit on painted religious statues being sold across the country, particularly by street vendors.

No Wiping or Kissing

“We respect the practice of the Catholic faithful to kiss or touch religious icons to express their belief as well as to seek divine guidance and intercession,” Thony Dizon, Coordinator of the EcoWaste Coalition’s Project Protect, said in an announcement by the group Sunday (April 13), as the Catholic Church's holiest week of the year opened with Palm Sunday.

“However, the frequent kissing or touching of revered statues or wiping them with handkerchiefs or towels may cause their paint coatings to be disturbed and to come off in time,” he said.

In December, the country's Department of Environment and Natural Resources issued a chemical control order (CCO) for lead and lead compounds that sets a threshold limit of 90 parts per million (ppm) for lead in paints. That limit has has been in effect in the United States since 1978.

The Philippines has also established a phaseout period by 2016 for leaded decorative paints and 2019 for leaded industrial paints.

The coalition bought six religious statues throughout the capital city of Manila and found excessive levels of lead in every one.

The EU-funded analysis examined 803 cans of paint representing 404 brands and found lead levels above 90 ppm in most of them. One in four cans had levels above 10,000 ppm, the report said.