Drywall work on a $150 million condominium project in downtown San Diego has been halted after California officials discovered that the subcontractor was unlicensed in the state.

Clayton Wall & Ceiling Systems Inc., based in Kelowna, British Columbia, did not have a proper license to perform the $6.34 million drywall job at the 45-story Pinnacle Towers residential project, investigators with the California Contractors State License Board and Department of Industrial Relations said Friday (April 11). 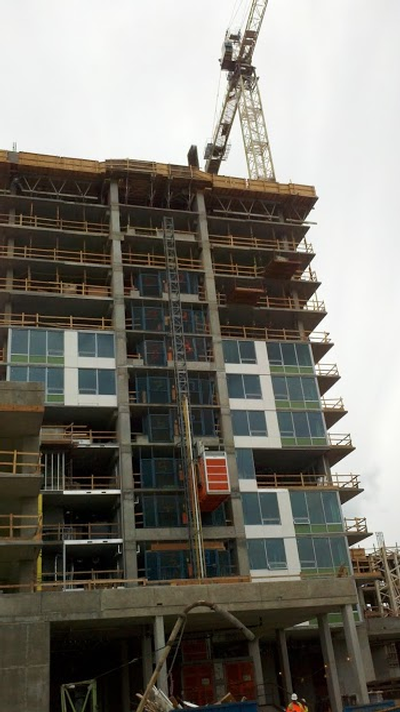 Images: CSLB
The Canadian drywall subcontractor on a $150 million project in downtown San Diego was ordered to stop work due to violation of contractors licensing rules in California.

The officials levied $79,000 in civil fines against the company.

CSLB issued a $15,000 penalty and administrative citation. The DIR’s Division of Labor Standards Enforcement (Labor Commissioner) issued a $64,000 penalty and citation for performing services without a valid state contractors license.

A representative for the company did not respond to a request for comment Monday (April 14).

“When it comes to contracting without a license, the law is very clear,” said CSLB Registrar Steve Sands. “You cannot enter a contract to work, or actually do any work until you’re licensed. There’s no gray area here.”

CSLB said the company contracted for the job with the primary contractor and developer Pinnacle International Development Inc. in August 2013. Four months later, Clayton applied for a California contractors license.

However, the licensing process was not completed before Clayton began performing the work in January, authorities say.

Responding to an industry tip, state investigators visited the apartment project site April 4, where they say they found the subcontractor performing drywall work without a license.

“An employer operating without a license creates an unfair advantage over businesses that follow the rules,” DIR Director Christine Baker said in a statement.

The officials stopped the drywall work and put Clayton’s license application on hold until the proposed fines are paid or until an appeal is heard.

“That will delay the company’s ability to work on the San Diego project, or any other project in the state,” the CSLB said.

The Vancouver, BC-based primary contractor may also face administrative action for contracting with a non-licensee, authorities say, noting that the investigation remains open.

The Pinnacle Towers project is expected to add 965 condos and apartments to the East Village neighborhood. Reports say it is scheduled for completion in late 2015.

Pinnacle International Development did not respond Monday to a request for more information.