Nearly half of U.S. highway contractors report that their work zones were struck by motor vehicles during the past year, according to a new study by the Associated General Contractors of America.

More of those crashes are killing motorists and passengers than contractors, however, the group found. 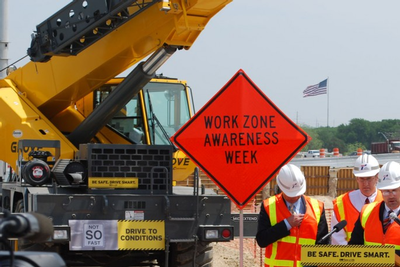 Images: AGC
Motorists and passengers were more likely than crews to be injured or killed in work-zone crashes, contractors told AGC. Six percent of the crashes in the past year killed contractors; 16 percent killed drivers or passengers.

"There is little margin for error when you work within a few inches of thousands of fast-moving vehicles,” said Tom Case, who chairs AGC's national highway and transportation division. “As the data makes clear, not enough drivers are slowing down and staying alert near work sites.”

More than 400 contractors contributed to the nationwide results, with a large enough sample of responses to allow for state-specific results in Texas, New York, California, Alabama, Iowa and North Carolina.

Of the available state results, Texas and New York reported the highest percentage crashes, with 57 percent each. North Carolina had the lowest, with 27 percent.

Nationwide, 45 percent of contractors reported "at least one crash" by a moving vehicle into a highway work zone in the previous year. Of those who had been hit:

One in five of the affected contractors said that one or more workers had been hurt in such a crash. Workers were killed at six percent of the crash sites, the report said.

In addition, one-quarter of the crash sites said the accident had resulted in construction delays, with 38 percent reporting delays of two, three or four days.

Nearly eight in 10 respondents said the problem had grown worse in the past decade, and 88 percent called crashes a "serious" or "very serious" problem, when compared with other work zone hazards.

Contractors endorsed multiple measures to address the problem, including tougher laws and penalties. Still, most (90 percent) simply urged tougher enforcement of current laws. Nearly that many (85 percent) said that a stronger police presence would help.

Nearly three in four (74 percent) said that the use of positive barriers would help improve safety, and 54 percent said their DOTs and other public owners included a requirement for positive barrier/separation in their bids.

Asked why a positive barrier was not used regularly:

But Case, senior vice president of Watsonville, CA-based Granite Construction, suggested that the best approach was to get motorists to drive more carefully.