After a unanimous chorus of “thanks but no thanks” from other federal agencies, the U.S. Navy is again shopping a redevelopment opportunity for a century-old prison to the private sector.

But casinos, prisons and chemical factories need not apply.

About 30 representatives of various companies attended a forum Wednesday (April 9) in Maine to learn more about the "lease opportunity" at Portsmouth Naval Shipyard in Kittery. 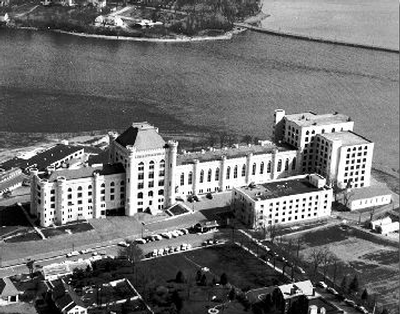 U.S. Navy
The Portsmouth Naval Prison was built in 1908 and closed in 1974. The Navy wants a new tenant to redevelop and lease it. The offer comes with many strings attached.

Wednesday's presentation, which was closed to the press, included information on the prison, leasing options, timetables and various requirements related to the 11.6-acre site, reports said.

'Alcatraz of the East'

The goal is to find a new life for the Portsmouth Naval Prison—sometimes called the "Alcatraz of the East"— which was built in 1908 and closed in 1974.

At the time of its construction, the castle-like prison on the southern edge of Seavey's Island was "considered the largest poured concrete building the world," the Navy said.

And in its time, "the Prison had an illustrious career and was known for its progressive and innovative efforts in the rehabilitation of naval personnel," the Navy said.

But after being vacant, except for storage, for two generations, the 265,000-square-foot building 50 miles north of Boston is itself in need of rehabilitation.

By every measure, the redevelopment task will be daunting.

First, the prison (officially, Building 93) cannot be demolished because it is eligible for listing on the National Register of Historic Places, shipyard executive director William Banks told reporters before the forum.

That also means that the National Register will be involved in any redevelopment.

Second, the building's new purpose must be "compatible with the shipyard's mission," said Banks. That rules out casinos, prisons, industries that produce hazardous waste, and other enterprises, news reports noted.

Third, the structure is full of friable asbestos and lead paint, which will present an extensive remediation project of its own. As part of its business plan, the selected tenant will have to prepare a National Environmental Policy Act document at its own cost, reports said.

Fourth, the Navy will not contribute to the renovation, although Gary Dion-Berube from the the Naval Facilities Engineering Command suggested that state or federal tax incentives might be available.

Finally, any public access to the prison through the shipyard grounds would require special security measures. However, the pre-solicitation noted that the prison is also accessible by water.

The Navy is looking for a 50-year lease. Fees from the tenants would be used to pay for maintenance and renovation of the rest of the base.

The Navy has tried twice before to lease the prison, in the 1990s and in 2008. Those offers fell flat.

However, authorities hope that this time could be different.

“The driver for us specifically has been the fact that we see the navy prison as an icon in the Seacoast community and we would like to see it restored as soon as possible to allow it to be preserved,” Banks told reporters last week.

The Navy will accept proposals through July 31. Officials said they hope to select a poroposal by the fall and finalize the leasing process by the end of 2015. Renovations would then begin.

Said Banks: "While this is not our first attempt to lease this structure, and although I cannot speculate on the outcome of the process, we are certainly hopeful a compatible use will be presented.”