Making Roofs Both Cool and Colorful

Dark, attractive metal roof and façades that are just as "cool" as their traditional white counterparts are the goal of a new research partnership by PPG Industries and the Department of Energy. 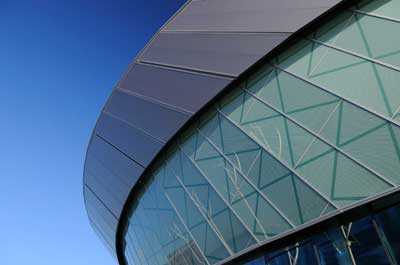 Together, PPG’s industrial coatings business and Berkeley Lab plan to produce “a more advanced class of dark-colored pigments that can convert a portion of the absorbed visible light energy into NIR energy that is radiated away from buildings.”

“While painting a metal roof white is the simplest way to keep the sun’s energy from heating a building’s interior, most consumers will do so only if the roof is flat,” PPG explains.

“For sloped roofs, they prefer darker coatings that absorb more visible light, including many that also absorb more invisible NIR solar radiation. Because colors absorb more solar energy as they get darker, buildings with dark-colored roofs are warmer and more expensive to cool than buildings with white roofs,” the company says.

PPG says the new pigment technology would be a significant advance over cool-coating pigments now on the market.

Further, the partners estimate that cool coatings based on the new pigment technology could achieve effective solar reflectance (ESR) values of 0.5 to 0.7, compared to ESR values of 0.1 to 0.3 for standard pigments.

An ESR improvement of 0.4 and widespread deployment of coatings with these pigments for residential applications in warm and hot areas of the United States could save up to $1.3 billion annually in related energy costs, the partners say.

Recently PPG partnered with the lab's Heat Island Group to study the effects of dirt build-up on cool roof coatings and with the lab's Windows & Daylighting group to examine energy-efficient window designs.