Trying to purge its books of white-elephant properties, the federal government has hatched a novel offer for construction contractors: provide redevelopment services in exchange for titles to two federal properties, including one where thousands of people are still working.

The U.S. General Services Administration, landlord to thousands of federal properties nationwide, has issued a Request for Qualifications (RFQ) seeking developers who would consider providing construction and development services in exchange for two buildings south of the National Mall in Washington, D.C. 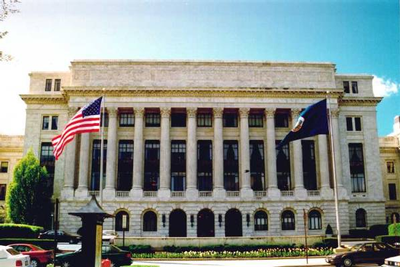 Photos unless otherwise credited: U.S. GSA
The long-vacant former USDA building known as the Cotton Annex is one of two buildings that GSA is considering offering developers in exchange for construction services.

The secure setting will eventually host 14,000 employees on the 350-acre site where the "Government Hospital for the Insane" (later, St. Elizabeths Hospital) was constructed in 1855.

Although the campus is designated a National Historic Landmark District, some of the buildings have been demolished and their materials recycled.

The buildings-for-services idea arose in 2012 when the GSA floated a Request for Information about redeveloping five outdated federal offices in the Southwest D.C. community known as Federal Triangle South.

A 2010 Presidental Memorandum tasked GSA with making better use of its facilities or disposing of them, and the agency is moving more than 800 federally owned properties into the disposal pipeline.

The National Capital Planning Commission, the federal planning agency for the District of Columbia) envisions the Federal Triangle South area (also now known as the Southwest EcoDistrict) as a sustainable community that stretches from the National Mall to the Southwest Waterfront.

The 2012 RFI sought a development vision for the area that would meet the community's needs, incorporate the planning recommendations of local commissions, and address the long-term needs and budget of the federal government.

The RFI drew responses from 10 developers, encouraging GSA Administrator Daniel M. Tangherlini to take the project to the next step.

Ridding the agency of two aging buildings that are expensive to operate while giving developers free properties ripe for redevelopment could prove a win-win, the agency figures.

The two buildings in the new RFQ are:

“The Federal Triangle South project is an opportunity to reexamine how the federal government uses these buildings and reassess how this space fits into the surrounding community,” Tangherlini said in a statement announcing the RFQ.

“This action will facilitate the city’s efforts to transform this precinct that is dominated by federal office buildings, into a mixed-use neighborhood that will both provide for a modern workplace for federal employees and create a vibrant, diverse, and special community of its own.”

Offerors deemed qualified in Stage 1 of the project will be invited to submit proposals in Stage 2, identifying specific consideration services that would be provided in exchange for the two properties identified.

The current project is considered something of a test run, The Washington Post reports. Tangherlini has also proposed swapping the J. Edgar Hoover Building for a new FBI headquarters campus.