The everlasting winter of 2013 put the big chill on sales of Zinsser, Rust-Oleum, DAP and other popular repair and maintenance brands, nicking the third-quarter results for parent company RPM International.

In the end, the showing was a dramatic turnaround from the third quarter of 2013, when RPM reported a $42.4 million loss due in large part to a $65 million legal settlement with the U.S. General Services Administration. 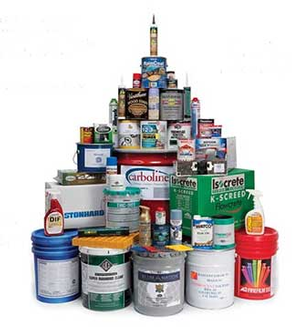 "We are pleased with RPM's third-quarter performance, especially in light of the severe cold weather during the quarter in North America, which had a pronounced effect on our consumer segment and impacted some of our industrial businesses as well," said Frank C. Sullivan, chairman and chief executive officer.

"Our strategically balanced business model continues to serve us well in these choppy economic times, with this quarter's industrial segment growth offsetting weather-induced weakness in the consumer segment.

"While the third quarter is typically affected by seasonality, the impact was even more pronounced this year."

In addition to the costs of the Tremco settlement—revised in Thursday's announcement to $68.8 million—RPM also recorded a $6.1 million adjustment in the third quarter of FY 2013 related to its acquisition of Viapol Ltda.

Compared to the adjusted results of the hard-hit year-ago quarter, EBIT improved 41.4 percent and net income improved 87.1 percent. Earnings per diluted share were up 71.4 percent.

Industrial segment sales grew 5.3 percent to $560.5 million in the third quarter, compared to the fiscal 2013 third quarter. Almost all of that growth was organic, RPM noted.

Industrial segment EBIT for the quarter was $22.7 million—a 162.4 percent improvement over the negative $66.3 million of a year ago.

"Our industrial segment has been improving sequentially over the last several quarters and turned in outstanding results this quarter, as virtually all sales growth was organic," said Sullivan.

In addition, Sullivan said, the company's cost-cutting measures of 2013 had "translated into significant leverage to the bottom line. Particularly encouraging was improved performance by most of RPM's European business units, businesses serving U.S. construction markets, and our Legend Brands subsidiary."

Industrial segment sales for the first nine months of the year increased 3.8 percent, to $2.0 billion.

Performance on the consumer side declined, however, with seasonally slow sales further battered by a harsh and extended winter.

On the other hand, nine-month sales on the consumer side increased by 12.0 percent to $1.1 billion over the first nine months of FY 2013. Organic sales growth accounted for 5.2 percent; acquisitions, for 6.8 percent.

Moreover, despite the weather's "dampening effect" on the third quarter, Sullivan said, the fundamentals of Rust-Oleum, DAP, Tremclad, Zinsser and other consumer businesses "remain very strong, and the recovery in residential housing is expected to continue."

The segment's overall focus on repair and maintenance "should drive deferred sales into the spring and summer months," he said.

Quarterly ups and downs aside, the company is sticking to its fiscal 2014 guidance of 4 to 6 percent sales growth on the industrial side, and 8 to 10 percent growth on the consumer side, he added.

"We see improving momentum in our industrial segment, combined with pent-up demand in our consumer segment as a result of the severe weather this winter in North America," said Sullivan.

"Due to stronger-than-anticipated leverage in our industrial segment, resulting from solid performance in Europe and businesses serving U.S. construction markets, we are increasing full-year EPS guidance to a range of $2.10 to $2.15 per diluted share, or 15 percent to 18 percent year-over-year growth, versus the range of $2.05 to $2.10 per diluted share announced last quarter."