The U.S. Occupational Safety and Health Administration has cited Atlantic Coast Asphalt of Jacksonville for the incident that left pipecutter Earl Robinson knee-deep in hot liquid asphalt while crews worked eight hours to rescue him. 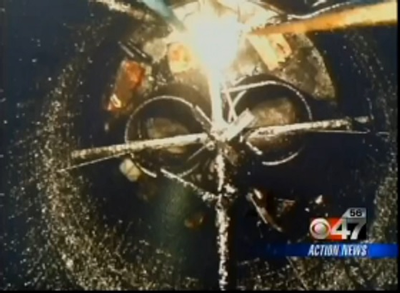 Screen grab /
Earl Robinson was trapped for eight hours in a large tank of hot asphalt.

Authorities said Robinson had been trying to cut a section of piping inside a large tank at the company's plant when he became stuck in the tar. Crews finally freed Robinson by cutting a large hole in the tank. He suffered severe burns to his feet and legs, authorities said.

Additional details of the accident and rescue were unavailable.

On March 25, OSHA announced that it had cited Atlantic Coast Asphalt with 10 serious safety and health violations, carrying proposed penalties of $63,360. Serious OSHA violations reflect "substantial probability" of death or serious injury from a hazard that an employer knew, or should have known, about.

"This incident could have been prevented if the employer followed OSHA's standards for lockout/tagout and permit-required confined-space procedures," said Brian Sturtecky, OSHA's area director in Jacksonville.

"When employers take shortcuts related to safety and health, they are gambling with employees' lives."

Atlantic Coast Asphalt manufactures and distributes hot-mix asphalt, is a subsidiary of Hubbard Construction Co., based in Winter Park, FL. Hubbard did not respond Wednesday (April 2) to a request for comment.

The citations allege that the company:

The company has 15 business days to pay the fine or contest the findings.