Pennsylvania officials are inviting four teams to submit proposals for one contract to replace more than 500 bridges in less than five years.

The winner-take-all approach is part of the state Department of Transportation's Rapid Bridge Replacement Project, a public-private partnership (P3) initiative. The state's P3 Board, created in 2012, approved the project in September 2013.

In addition to using one design-build contractor, the 500-plus bridges will be replaced by structures with "the same basic design and construction standards," allowing the state to save money through economies of scale, officials said. 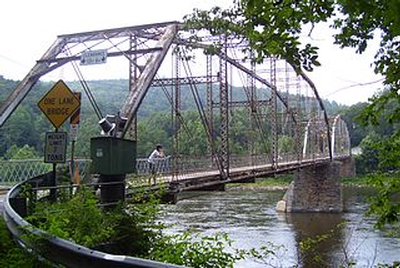 Wikimedia Commons / Beyond My Ke
The Pond Eddy Bridge is one of about 4,500 Pennsylvania bridges deemed structurally deficient. About 18 percent of Pennsylvania's bridges have that label, compared with 7.3 percent nationwide.

The selection of the four teams was announced Wednesday (March 26) by PennDOT Secretary Barry J. Schoch.

State of the Bridges

The average age of bridges in Pennsylvania is over 50 years old.

“This initiative reflects Governor Corbett’s strong commitment to making the state’s roads and bridges safer and improving mobility,” Schoch said. “Because of the project’s size, this will also be a great opportunity for Pennsylvania companies to work with the team we ultimately select.”

The teams invited to submit proposals are:

PennDOT issued a Request for Qualifications for bridge project in December. The teams were scored and selected based on a variety of criteria, including their financial capability to carry out the project; their background and experience in managing comparable projects; and each team's understanding of the project, PennDOT said.

P3 is an increasingly popular infrastructure funding mechanism that involves a contractual agreement between a public and private entity.

The selected team will manage the bridges' design, construction and maintenance for a yet-to-be-determined number of years under one contract, according to PennDOT. The team will be responsible for financing the effort, and PennDOT will make payments based on the contractor’s adherence to the contract terms.

PennDOT will continue to own all of the bridges and will be responsible for routine maintenance, such as snow plowing and debris removal.

PennDOT expects to release final project details and requirements to the four teams this summer and select a preferred proposal this fall. Construction is expected to begin in the summer of 2015.

The Pennsylvania bridge project is similar to a widely applauded initiative pioneered by the state of Missouri in 2008. MoDOT's "Safe & Sound Bridge Improvement Program," launched in September 2008, aimed to rehabilitate nearly 250 bridges and completely replace 554 by the end of 2014.

The list included bridges from each of Missouri's 114 counties.

Nearly 100 of the rehab projects were under contract by the spring of 2009.

The 554 replacement bridges were accomplished through a single design-build contract awarded in May 2009 to KTU Constructors, a joint venture of Kiewit Western Company, Traylor Brothers Inc. and United Contractors Inc.

In the end, the contractor beat the deadline by 14 months and came in below the $685 million budget.

Last year, the Safe & Sound Program received a People's Choice Award from AASHTO as one of the top two transportation projects in the nation. The award was decided in a vote by the general public.