PPG on the Rise in Latin America

With a larger footprint in Mexico and a fresh one in Panama, PPG Industries is amping up its presence in the hot paint and coatings market south of the U.S. border.

This month alone, PPG has announced:

The Pittsburgh-based coatings and specialty materials leader announced last week that it had reached an agreement to acquire substantially all of the assets of Canal Supplies Inc., a privately owned distributor to customers in Central America. 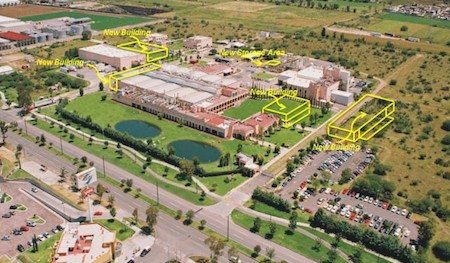 Photos: PPG
PPG announced it will spend $27 million expanding its manufacturing facility in Mexico, including the addition of 100,000 square feet of production and laboratory space.

On March 18, PPG announced plans for a $27 million expansion of its Mexico manufacturing facility in San Juan del Rio, Queretaro.

Earlier this month, PPG nixed its licensee agreement with the Comex Group, a leading paint producer in Central and South America, opting instead to sell and service its Amercoat brand in Mexico directly.

According to PPG, the acquisition of Canal Supplies will enhance access to PPG products for customers in Central America—specifically in Costa Rica and Panama, which the company says are growth markets for protective and marine coatings.

Financial terms were not disclosed, but the transaction is expected to close in the second quarter, PPG says.

"PPG looks forward to continuing to build its supply networks throughout Central America and meet the growing demand for our products in Panama," said Tim Knavish, VP of protective and marine coatings.

"The Panama Canal is an important regional economic hub for the industry. The acquisition will increase PPG's ability to deliver protective and marine coatings to customers throughout the region," Knavish said.

In Mexico, PPG held a groundbreaking cermony March 18 for the expansion of its Queretaro plant.

Four new buildings will be added to the current complex, totaling about 100,000 square feet of additional production and laboratory space. The added capacity will allow PPG to meet increasing demand for its automotive OEM, protective and marine, packaging and industrial customers in Mexico.

"The expansion enables us to meet the additional demand stemming from rapid growth in recent years by our Mexico-based customers and provide PPG coatings to other local end-use markets," Macouzet said.

The expanded facility will increase the current workforce by 30 percent with over 115 employees, PPG predicts.

In January, PPG announced "all-time record full-year earnings" for 2013, as well as a 25 percent increase in fourth-quarter net sales for the Performance Coatings division, which includes Protective and Marine Coatings business.

PPG completed the second-largest acquisition in its history in April 2013, shelling out $1.05 billion for AkzoNobel's North American decorative paints business.

The company expanded its protective and marine portfolio with its first-quarter acquisition of Boxborough, MA-based Hi-Temp Coatings Technology Co. for an undisclosed amount.