Despite a global push to ban lead in paint, “extreme levels” of the toxin are still present in many paints manufactured and sold for use in developing countries, a new study reports.

The study—funded by the European Union—found that 76 percent of oil-based, enamel decorative paints purchased in seven Asian countries contained lead at concentrations higher than 90 ppm (the standard in the U.S.).

At least a quarter of the 803 paint cans analyzed as part of the study contained levels above 10,000 ppm, according to the researchers from IPEN (International Persistent Organic Pollutants Elimination Network). 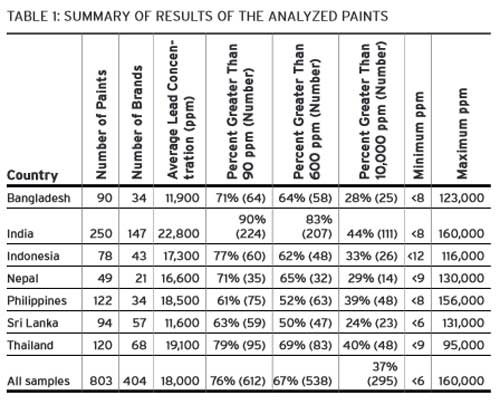 In each country, one or more of the tinted paints analyzed contained lead levels above 95,000 ppm, the report relates.

The project was established to eliminate lead in paint and raise awareness among business owners and consumers about the human health impacts of lead-based decorative paints, especially their effect on children under six years of age.

The World Health Organization has determined that there is no safe level of childhood lead exposure.

“Even relatively low levels of exposure can cause serious and, in some cases, irreversible neurological damage,” according to WHO.

The heavy metal was used in the formulation of paints and coatings to speed up drying and increase durability. However, a number of industrialized countries have banned the use of added lead in paints.

The United States banned lead in household paints in 1978, although paints that contain lead are still used in industrial and protective applications.

Despite the bans and reported health hazards, lead in paint remains one of the largest sources of lead exposure globally, according to the project organizers.

According to the study, which was conducted from November 2012 to February 2013, brightly colored paints, such as red, yellow, and green, contained much higher levels of lead than white paints.

In several countries, the average lead content was more than 10 times higher for the colored paints when compared to the average of the white paints, the researchers report.

The international researchers also reported that some market-leading brands have removed lead from their paint production; thus, paints with undetectable levels of lead were available in all countries. The paints were priced similarly to lead-containing paints, the team reports.

Paints that contained lead did not state this on the label in any country analyzed, according to the report. In addition, there were no warnings about the hazards of lead or lead dust included on any of the labels.

The report said that 95 paint cans included claims that they were “lead-free,” although 17 of them contained levels of lead ranging from 230 ppm to 56,000 ppm, the team reported.

The Asia Pacific region has become the largest market for paints and coatings in the world, representing 35 percent of the nearly $90 billion global value of all coatings, the report said.

IPEN recommends that the countries work quickly to approve regulations to ban the manufacture, import, export, distribution, sale and use of paint with total lead content above 90 ppm.

Of the seven countries included in the study, only Sri Lanka had a mandatory standard in place during the study period. The country limits the lead content in decorative enamel paints to 600 ppm. The Philippines passed legislation in December 2013 prohibiting lead levels in decorative paint above 90 ppm.

However, according to the study findings, enforcement is lacking.

The researchers urge government and government agencies in the Asian countries to implement enforcement programs and to source only unleaded paints for public buildings, playgrounds, day care centers and schools.

As for paint makers, the study’s authors urge them to use non-hazardous substitutes in paint formulation and commit to a third-party certification and labeling program to ensure that all paints sold in the market meet the proposed regulatory standard of 90 ppm.