Federal contractors must now comply with affirmative-action benchmarks for hiring veterans and people with disabilities, after a legal bid failed to block one of the rules.

U.S. District Court Judge Emmet G. Sullivan rejected on Friday (March 21) a challenge by the Associated Builders and Contractors Inc. to block the Office of Federal Contract Compliance Programs from implementing its Final Rule to Improve Job Opportunities for Individuals with Disabilities, which was announced Aug. 27, 2013. 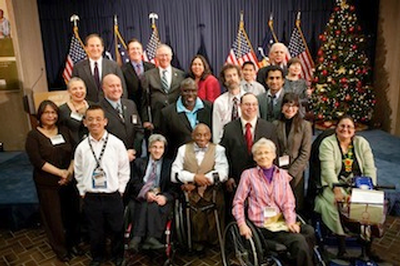 DOL
The new rule establishes a nationwide 7 percent hiring goal for qualified individuals with disabilities. That applies to each job group in a company with more than 100 employees, or to the entire workforce for companies with 100 or fewer employees.

Sullivan's ruling cleared the way for that rule, and a similar measure regarding the hiring of veterans, to take effect Monday (March 24).

Goals for Disabled and Veterans

The disability hiring rule updates requirements under Section 503 of the Rehabilitation Act of 1973.

The rule, for federal contractors and subcontractors, establishes a nationwide 7 percent hiring goal for qualified individuals with disabilities. The goal applies to each job group in a company with more than 100 employees, or to the entire workforce for companies with 100 or fewer employees.

The disability hiring rule was released with a companion Final Rule to Improve Job Opportunities for Protected Veterans.

That rule, which updates requirements of the Vietnam Era Veterans' Readjustment Assistance Act of 1974 (VEVVRA), requires federal contractors and subcontractors to establish "annual hiring benchmarks for protected veterans," using one of several methods described in the rule.

The contracting industry opposed both rules from the start. When the measures were issued, the Associated General Contractors of America called them "oppressive employment regulations" that would force federal contractors to spend about $6 billion annually to document actions they were already taking.

The eventual ABC legal challenge, filed in November, applied only to the disability rule. The complaint said that unlike the original statute governing hiring of veterans, the 1973 Rehabilitation Act does not require contractors to collect and report hiring and employment data.

ABC, which represents 19,000 open-shop construction industry firms, also contended that meeting the hiring goals would be difficult, because much of the construction workforce is "uniquely fluid and temporary" and the industry's work is "uniquely physical and hazardous."

The group also said there was "no evidence" that "significant numbers of government contractors in the construction industry" have failed to meet their Section 503 hiring obligations.

'More Than a Paperwork Exercise'

In his 42-page Memorandum Opinion, Sullivan said that the new rule fell well within the authority of Section 503 regulations that require "every Government contractor that has 50 or more employees and a contract of $50,000 or more" to "prepare and maintain an affirmative action program."

In addition, the judge noted, Executive Order 11246 established equal-opportunity employment guidelines for federal contractors and subcontractors back in the 1960s.

Sullivan noted that the new rule arose when OFCCP continued to see disparities in hiring qualified individuals with disabilities two generations after the other measures were in place.

When the agency sought input on correcting this disparity, commenters said that the federal effort on behalf of people with disabilities was "largely meaningless" and required both firmer goals and more teeth—in short, the same efforts made on behalf of women and minorities, the judge said.

"The Rule clarifies that affirmative action 'is more than a paperwork exercise,'" the judge wrote.

Two days before Sullivan's ruling was issued, ABC posted an announcement on its site, saying the rules would "drastically alter federal contractors' existing affirmative action nondiscrimination obligations with respect to veterans and individuals with disabilities."

The association promoted a webinar and a guidance document regarding compliance assistance, but neither was available Wednesday (March 26) on the website.

ABC did not respond Wednesday to a request for comment or clarification.