There’s a rule that paint inspectors live by: When you look at the exterior concrete walls of a high-rise condo or apartment building, don’t assume that the paint is planning to stay there. 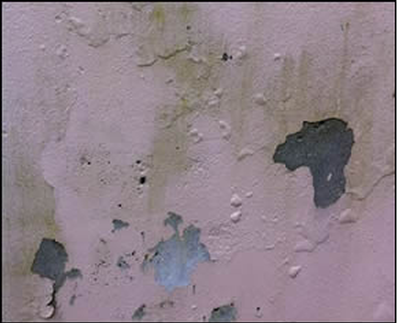 Photos: MPI
You have one chance to get the initial new-construction high-rise paint job right. Bad decisions at that stage won't hide for long.

The paint may look intact to the naked eye, but there may be little or no adhesion between the coating and the underlying wall. Any stress applied to the paint film—such as applying a repaint coat—may cause immediate and dramatic failure.

That’s because the same error gets made again and again at the new-construction phase. And if it’s not caught and corrected at the first repaint, the price of fixing the problem can escalate dramatically.

That’s what this paint inspector saw when investigating a problem on an 18-story high rise.

The Case of the High-Rise Repaint

It had been nine years since the initial construction and paint job, and it was time to freshen up the finish. The owner awarded the bid to a qualified painting contractor whose bid had noted bubbles and blisters in the existing paint film that the contractor believed were the result of high moisture content in the concrete.

The bid stated that the contractor would remove all bubbles and areas of weak adhesion and that if the bubbles reappeared, “they would be repaired once the cause is identified.”

This type of language alone should have thrown red flags all over the bid and the project.

The first rule of maintenance repainting is: When the existing film exhibits obvious evidence of failure, don’t write the repaint spec or even think about starting the job until the cause of the existing failure is determined AND rectified.

Otherwise, there’s a very good chance that whatever caused the initial coating to fail will cause the repaint coat to fail, and you’ll have thrown a lot of money down the drain.

Nevertheless, the project went forward. The paint supplier and product were selected, and a coating approved under MPI #40 Latex, Exterior, High Build was applied at 10-12 mils. The manufacturer’s five-year warranty required it to do a site review to evaluate the surface before painting.

The manufacturer’s reps submitted multiple reports that noted the same blisters and adhesion failures, but they didn’t contact the owner to discuss the problem and how it could impact the warranty.

The contractor then proceeded with the job, prepping the surface with a thorough power wash to remove dirt and contaminants, and then applying the specified coating.

When several tenants complained that the new paint visible from their balconies showed signs of significant bubbling and blistering, this paint inspector was called in.

What the Inspector Saw

The inspector looked at two balconies, noted the paint bubbles and blisters, cut them in half, and found that the edges could easily be peeled off in sheets down to the bare concrete surface.

On the back of the sheets of paint were telltale signs of concrete dust. Applying adhesion tape as described in ASTM D3359 elicited the same results. Both the original and new coating were easily removed down to bare concrete, again with substantial evidence of dust and contaminants on the back of the paint film.

The bare concrete also showed considerable dust and the weak, thin cover called laitance. These were poured-in-place walls; with poured-in-place, the vibration required to consolidate the concrete can push water and fine particles to the surface, creating laitance. Laitance must be removed during initial surface preparation, or failures like this can occur.

It was also apparent that the concrete had been sacked during original construction to fill bug holes and surface imperfections.

The considerable dust on the bare concrete surface suggested that the sacking material had deteriorated over time.

In our experience, if you peel off the coating and see a lot of dust stuck to the back of the film—and when you touch the bare substrate underneath and get concrete dust all over your hands—you’ve got either a sacking or laitance problem, or both.

This is by far the most common failure we find on exterior high-rise concrete walls.

It begins thus: The same vibration that leads to laitance can cause air bubbles to be trapped at the form face, resulting in the tiny voids or holes in the concrete surface we call bugholes. Most architects and owners consider these holes unsightly and request that sacking be applied to fill them.

We understand the desire for an aesthetically pleasing wall surface, but keep in mind that it takes a great deal of skill to apply sacking material properly. All too often, sacking creates a weak layer of poorly adhered concrete, and failure to remove these weak layers before the initial paint job can lead to failures like the one described here.

The inspector also noted hard edges in the existing film that had been overcoated with the repaint finish, which suggests that the painter had likewise seen the blisters, picked at the failed areas, stripped off the blistered paint just as easily as the inspector had, and then simply coated over the area.

This is not a recommended protocol. If you, as the painter, can peel the blistered film off the surface in sheets down to the bare concrete, stop what you’re doing and inform the owner. Continuing the job is the painter’s version of walking in the Valley of the Shadow of Death.

It is unclear in this case whether the contractor failed to report the problems he saw—or if he had reported the problems to the owner, and the owner had chosen to ignore them.

The inspector gave this report to the owner.

The problem appeared to have started when, before paint application to the new construction, the wall surfaces were not cleaned properly, so the coating was applied over poor-quality sacking and laitance residue. These contaminants created a barrier that impeded adhesion between the substrate and the coating.

So now, the owner had what was essentially a coating time bomb on his hands. The lack of adhesion was almost certainly widespread over the building — not just on the balconies the inspector examined — so the blistering was likely to grow as freeze/thaw and other stresses are exerted on the coating.

How to Fix the Problem

The inspector recommended that:

Hand and power tools can be suitable for coating removal where the adhesion is so poor. If pressure washing is used either for paint removal or to clean the surface of dust and laitance, remember that you are wetting the concrete, which can create a new problem for coating adhesion.

Moisture meter readings should be taken in the same area before and after power washing to assure that the concrete moisture level is back to its original state before coating application. Under no circumstances should the coating be applied the same day as the power washing.

And the coating manufacturer’s warranty? We assume it will not be forthcoming, since the coating performed properly. It adhered perfectly to the existing film, which is essentially what the paint manufacturer is warranting.

(When both the new and the old coating peel from the surface, the warranty is highly in doubt.)

In dollars and cents, we estimate the total cost for the job would now be $250,000, which is quite a few ticks above the $100,000 the owner originally planned.

1: Don’t Create the Problem In the First Place

The first “wrong” in this case was committed at new construction. The painting contractor performed insufficient or non-existent surface prep.

And it appears that no professional coating inspection was used. Paint inspectors are keenly aware of the need to remove all dust and contaminants from the surface before painting, so hiring an inspector for the job could have assured proper prep.

Furthermore, if the painter is facing a newly sacked concrete wall, doing a test patch is an absolute must. Apply a coat of the selected material over a sacked area, allow it to cure, and then do an adhesion test.

Most often, you’ll either get a rating 5A (perfect adhesion) or 0A (coating peels right off with a load of fine concrete dust on the back).

2: Don’t Just Paint Over It

As we said in the beginning: Always determine the cause of failure before writing the repaint spec, let alone doing the job. It appears that this owner and contractor allowed work to start and continue despite knowing that there could be an escalating problem.

On the other hand, a professional paint inspector could have been called in once the first blisters were noted and had the problem diagnosed in less than an hour, as follows:

It’s not always this simple, but often enough, it is.

After seeing so many failures like this, we find it interesting that contractors, owners, engineers, and architects can spend a year or more developing specifications and bid documents; let paint jobs for $100,000 or more; and then hesitate to invest roughly $5,000 on coating inspection to assure the paint is going to perform as expected.

It’s a shame, because in new construction, you’ve got all the tools to do the job right the first time and assure maximum life expectancy from the applied coatings.

But in repaint work, all of the parties—the owner, the paint manufacturer’s rep, and the contractor—are required to walk in and fix what could be the careless and costly oversights of the team that came before them.